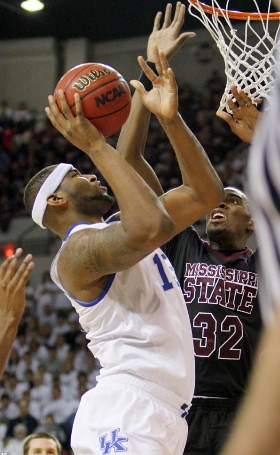 The sports schedule is a little hectic. Pro basketball is running strong. College and High School basketball has entered the tournament phase. NASCAR just fired up the engines for another season. Golf tournaments are building towards the Masters and Tiger’s return. Mondays are good days to plan out your week and make sure you don’t miss any of the UK-related action.

Monday (3/15/10) –Women’s Basketball – NCAA Tournament Selection Show – ESPN – 7:00p: I know things are all kinds of crazy with the men’s team right about now, but, before you get all jingle brained with brackets, remember to tune into ESPN tonight to watch the introduction of the women’s basketball bracket. ESPN’s bracketology gurus have UK as a 4 seed and playing their first round game out in Berkeley, Califor-nye-ay. While taking a road trip to California might be fun overall, I hope the actual brackets place the Cats in one of the closer venues for their first round game (like Louisville, Knoxville, or Cincinnati). In the only poll that matters (ESPN/USA since that other poll failed to recognize Kentucky for pretty much the entire year), UK has settled into the 16 spot. Congrats again on a great season and good luck tonight, ladies.

Tuesday (3/16/10) –Softball – Alabama at Kentucky – 1:30p: March has been a little rough on our softball team. After opening the year 11-3, once the calendar flipped from February, the ladies have gone 4-4 including a bottom-of-the-9th-walk-off-RBI by Auburn to lose the rubber match yesterday. Lousy Smarch weather (/Homer). The softball team looks to turn things around and get over .500 against a fairly strong Alabama team. Bama just took a series against #4 Georgia this weekend and is currently ranked #7. Of course, I am also using the ESPN poll for softball as they are giving UK some respect by ranking them around #27. The USA Today one? Not so much, so to hell with them.

Wednesday (3/17/10) –Men’s Baseball – Wright State at Kentucky – 6:30p: Your Bat Cats are currently 13-2 and are ranked #22 in the country. They have a full schedule this week. On Monday, they take on Murray State, Wednesday they tackle Wright State, and on Friday they begin a three game series with Ole Miss State (Really, just Mississippi, but I got on a roll). The two States (Murry and Wright) shouldn’t be a problem, but Mississippi is #17 and will be a huge test for the Wildcats. On a different tangent, did you know there are, like, 6 polls for baseball? Who knew this many venues followed college baseball? All of them (that are current) have UK ranked anywhere from 19 to 24. Can we not consolidate some of these bad boys? I’ll see what I can do.

Thursday (3/18/10) –Men’s Basketball – NCAA Tournament – ETSU vs Kentucky – CBS – 7:15p: You’ll get more than enough coverage for this game over the next 3 days, so I’ll just hit on some thoughts regarding the season in general. You know what is nice? Winning 30 freaking games again. During the SEC tournament, UK tossed up its 12th 30-win season. That is an NCAA record and a standard of winning that has been missing from UK for too long. The last time we did this was the 2002-2003 season where Tubby’s team went 32-4. The newly spectacled coach actually won 30 games twice at UK (the other time being his championship season in 1998). For comparison’s sake, Pitino won 30 games 3 times, Sutton and Hall 1 time each, and Rupp won 30 games 4 times. I know it is a bit of an arbitrary mark, but it used to be that winning 20 games was the marker of a good team and 25 was an elite team. I think those bars have been bumped up about 5 games on each level. Additionally, I like the whole #1 seed thing and this is the 10th time UK has obtained a #1 seed in the NCAA tournament.

You know what I don’t like? The de-emphasis on the conference tournaments. I think the NCAA could and should have sent a message to Syracuse by giving West Virginia a #1 seed for winning the Big East. It should mean something to win the conference tournament even for those teams that have secured at-large bids. The whispers of the ‘Cuse sandbagging in the Big East tourney are troubling. What? Greg Doyle said the same thing? I knew I liked that guy.

Friday (3/19/10) –Various Events: This is the best time of year for college hoop fans and it doesn’t really matter what else is going on once NCAA games start up. Thursday and Friday are littered with games during the workday and into the night that will have everyone buzzing. That pretty much takes away from any of the UK tennis, golf, baseball, gymnastics, swimming and diving, and track that is going on this entire weekend. In fact, most of those athletes will probably be checking their iphones for score updates. With all that said, I’ll use this space to congratulate the UK Rifle team for their 4th place finish in the NCAA tournament last week. Good luck and a big thanks to the seniors Leslie Angeli, Thomas Csenge, Jennifer Pason, and KSR fav Ashley Jackson for making it a fun season. Now, if you people would just learn to ski, we might get a gold medal in the biathlon. Let’s do this!

Saturday (3/20/10) –Men’s Basketball – NCAA Tournament – Texas/WF vs Kentucky – TBA: A couple of random thoughts here since we don’t really know who we are playing. First, isn’t the internet great? Remember when you had to wait until the next day for the newspaper to come out with brackets and they were usually printed with a color background that made them hard to read or copy? Or even the copies of blank brackets, that looked like they were hand drawn by 5 year olds, that got passed around the office/classroom on Monday morning? Now within seconds of the announcements you have a printable bracket with seeding information, records, locations, and game times. How can you not love that?

Third, if you are like me, I root for college teams from my state and my conference to do well in the NCAA tournament (unless, of course, they are playing UK). It sort of bugs me when the NCAA does something like matching UK and EKU in an opening round game in 2005 (C’mon, tourney committee. Let all the UK fans root for EKU to beat a different #2 seed like Wake Forest or UConn). This year’s problematic match-up is Murray State vs Vanderbilt. A Kentucky team vs. an SEC school. Ultimately, I’d like to see both teams advance by beating teams from other conferences, but if forced to choose I guess I’m pulling for Murray. Am I the only one that is bothered by this?

Since the tournament rages all weekend, that is where I will end it. Good luck to the Wildcats and for those traveling to Bourbon Street, stay safe.