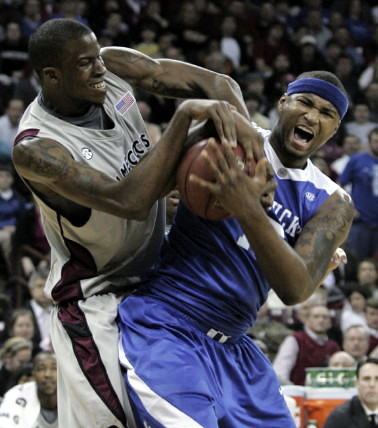 The sports schedule is a little hectic. High school, college, and pro basketball are running strong. NASCAR just fired up the engines for another season. Golf tournaments are building towards the Masters and Tiger’s return. Pro Bowling is hitting the home stretch. Mondays are good days to plan out your week and make sure you don’t miss any of the UK-related action.

Monday (2/22/10) –Men’s Golf – Mobile Bay Intercollegiate – All Day: I’m going to continue this little theme of wishing I wasn’t in a sloppy, muddy, wintery central Kentucky area and daydream of being able to play at a course like this one right about now. If I had a time machine, I would go back, jam a putter in a young Chris Johns’ hand, and implore him to hit the links for the Wildcats later on in life. I digress. The Men’s Golf Team headed down to Mobile yesterday and started this little tournament in which they are currently 15th place. Teams ahead of UK so far include Vandy (the leader), Ole Miss, Mississippi State, and the dirty Cards. Our boys have some work to do and their coach is expecting more out of his crew after a 13th place finish at the Jacksonville University Invitational a couple of weeks ago. I have confidence that my boy Ben Fuqua (From? Danville) will rally the team to win this tourney. Or at least place higher than Louisville. I’ll take either.

Wednesday (2/24/10) –Men’s Baseball – Murray State at Kentucky – 4:00p: Your Wildcat Baseball Team is currently undefeated after sweeping the Caravelle Resort Tournament last week. The Bat Cats destroyed the Virginia Bastard Duo (Tech and West) by a combined score of 21-6 before using a 9th inning small-ball sequence to eek out a win against Coastal Carolina. The Chanticleers (Still one of the best nicknames going. Chaucer was the inspiration for their mascot. Stuff like that makes Chris Tomlin all gooey inside) were ranked #12 in the nation at the time (NCAA Rankings) and was a huge statement win for the Cats.

Thursday (2/25/10) –Women’s Basketball – Kentucky at Tennessee – FSN – 7:00p: The UK Hoops squad kicks off a night of basketball action when they take on Pat Summit’s #5 ranked Vols down in Knoxville. Kentucky is the surprising #2 team in the SEC and joins Tennessee as the only schools with double digit conference wins this so far this season. This is a huge game with major implications within the SEC. If the Wildcats could pull off the upset, it would be the signature win of the Matthew Mitchell era and strengthen UK’s tournament resume. Current Bracketology predictions over at ESPN show the Cats to be a 4 seed playing out of Norfolk in the Kansas City bracket. Note that this is a televised game on FSN and will server as a great appetizer for the men’s game.

Thursday (2/25/10) –Men’s Basketball – South Carolina at Kentucky – ESPN2 – 9:00p: Ah. Sweet revenge. What more can be said? This UK team strikes me as one that will be extra motivated to not only win but utterly destroy the Gamecocks this Thursday (by the way, the Chanticleers used the same mascot as the Gamecocks for awhile when they were affiliated with the main university. This is called a ‘call back’). I can’t see the Cats not being ready for Devan Downey and simply shutting him down. USC has lost 3 straight and just seems ripe for a Wildcat statement game. As an aside, a question to all the ESPN talking heads for clarification, when DeMarcus Cousins shows emotion he should be chastised but when AJ Ogilvy has to be restrained from screaming at the top of his lungs in Cousins’ face, he gets a pass and it is never mentioned again? I’m just trying to get a bead on what is acceptable behavior from those that live on ivory pedestals.

Friday (2/26/10) –Women’s Softball – Chattanooga Tournament – All Day: What about this UK softball team? They have won 5 straight and are sporting an impressive 8-2 record. I don’t have much to say because most of my experience with softball involves playing with a beer in hand and a home run rule in place. Once ‘Beefy’ from Al’s Towing and Bait Shoppe (the extra ‘e’ gives it a touch of class) blasts one out of the park in his 3rd straight at bat, you know you have to make a home run limit. I do watch softball on tv occasionally and I am pretty sure every single UK player could strike out ‘Beefy’ looking. Good times.

Saturday (2/27/10) –Men’s Basketball – Kentucky at Tennessee – CBS – 12:00p: Ever since UK ran roughshod over the UNC/UCONN/Indiana portion of their schedule, everybody has been pointing to this stretch of games as the true test for this UK basketball team. Starting with the first Tennessee game at home, every announcer was predicting that UK would be lucky to complete the season-ending 7 game stretch with a 5-2 record. How about now? You don’t hear as many dire predictions about the Wildcats and their possible fall from grace. Calipari has shortened up the rotation, Cousins has focused his emotion in the right direction, and Patrick Patterson has re-emerged as the superstar we all know him to be. The result is a 3-0 record with games that have had the grind-it-out intensity of a contest deep in the NCAA tournament. While some might want the big, blow-out games late in the season, I actually prefer the Cats to get tested and believe the games in Nashville, Starkville, and Knoxville will help build the necessary toughness and resiliency that is required of a NCAA champion. Bring it on.

Sunday (2/28/10) –Women’s Basketball – Kentucky at Auburn – BBSN – 3:00p: I was at the game Sunday when the UK Hoops team honored their seniors, ended a perfect home record for the 09-10 season, and extracted some revenge on the South Carolina Gamecocks (And don’t think for a minute it was easy going against Kelsey Bone. She is only a freshman and is going to be a thorn in UK’s side for years to come). The game was very fun and entertaining. There was plenty of emotion with the seniors leaving, the band was rocking, the seats were packed with passionate fans, and I had at least 5 moments where I jumped out of my seat after witnessing a spectacular play. I mean, cross-over dribble, double spin move, under-the-goal, blind alley-oop to Victoria Dunlap type of plays. It was impressive. The coup de grace came after the game when Coach Mitchell took the mike and, after thanking the fans, spoke from the heart about his two seniors, Amani Franklin and Lydia Watkins (From? Hop-town. And by the way, that girl has personality. A joy to watch). Got a little dusty in old Memorial that Sunday afternoon. Congrats to the seniors and to the whole team for a great season.