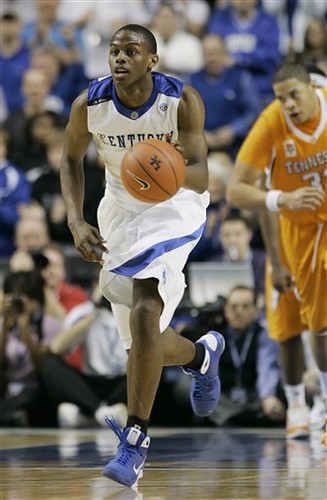 The sports schedule is getting a little hectic. The NFL is wrapping up. High school, college, and pro basketball are running strong. Mondays are good days to plan out your week and make sure you don’t miss any of the UK-related action.

Monday (2/8/10) –Men’s Golf – Jacksonville University Invitational – All Day: Golf is starting already? Must be nice. It is kind of kooky how well Kentucky (both the state and the school) is represented in professional golf. For instance, UK’s own JB Holmes just finished tied for third at the Northern Trust Open. JB is, aside from his moniker, best known as one of the pivotal golfers that helped the US Ryder Cup team defeat Europe in Valhalla in 2008. By my count, we have Steve Flesch and Holmes as UK grads kicking butt in the PGA as well as UK fan, Calipari friend, and WKU grad Kenny Perry. PGA Pro Josh Teater is from Danville and went to Morehead State so I will assume he is a UK fan and give him the benefit of the doubt. One of the senior anchors of this year’s UK team, Ben Fuqua (FOO-kway, that is fun to say), is also from Danville and ended the 2009 season on a hot streak by finishing fourth in the Hummingbird Intercollegiate. Good luck in Jacksonville, gentlemen. I couldn’t be more jealous.

Tuesday (2/9/10) –Men’s Basketball – Alabama at Kentucky – ESPNU – 9:00p: I still can’t get over Mark Gottfried not coaching Alabama. What is it with these SEC teams and their coaches? Gottfried compiled a 210-132 record for the Crimson Tide, was above .500 in SEC play, and took UA to 5 straight NCAA tournaments which included a run to the Elite Eight. Isn’t that pretty much the most you can expect from an Alabama basketball coach? Gottfried should have been lionized down there, but instead he hits the first little bit of trouble and is pushed out by the AD. It is similar to John Brady’s tenure at LSU and you see how well a coaching change down there has played out. Anyway, The Tide rolls into Lexington to start a slate of three straight 9:00pm games (and 4 of the next five). Alabama is in the midst of a 3 game losing streak despite playing well and falling to Auburn and Florida by one point each. Fun Fact: The Tide have held the lead at halftime in all 9 of their SEC games this year. Holding the lead in the second half hasn’t been their forte, however. Expect the smaller (no player is listed over 6’9″), scrappy pachyderms to give the Cats a fight.

Wednesday (2/10/10) –Women’s Tennis – Marshall at Kentucky – 1:00p: February hasn’t been kind to the Women’s Wildcat Tennis squad. They lost to both Ohio State and Georgia Tech by a combined score of 14-0. The #31 ranked Cats look to rebound against Marshall and improve on their 1-5 record.

Thursday (2/11/10) –Women’s Basketball – Georgia at Kentucky – FSN – 7:00p: These Lady Cats are just absolutely slaughtering opponents. As predicted in this space last week, the UK Hoops team completed a SEC West tour with a sweep after they took down Arkansas by 14 points before the Super Bowl yesterday. The Cats look to avenge a 1 point overtime loss to Georgia that occurred earlier in the year. UGA was the early season favorite to challenge Tennessee for the SEC crown as they started off hot and climbed into the top ten in the rankings. Since playing Kentucky though, the Bulldogs haven’t been the same losing 5 of their next 9 despite a 3 point win over the Volunteers. After sharpening their claws against the SEC West for 7 straight games, the Cats will use this game as a measuring stick for their progress. This one is televised on Fox demonstrating that even the broadcasting suits are taking notice of the Wildcats.

Saturday (2/13/10) –Men’s Basketball – Tennessee at Kentucky – ESPN – 9:00p: This game is the start of the real meat of the conference schedule for the Cats. UT kicks off a gauntlet of tough rival teams that are either ranked or have been ranked at some point in the year. I can’t predict too much as this is written on a Monday and UT takes on Vandy at Vandy on Tuesday, but it seems like the loss of Tyler Smith is starting to wear on the Big Orange a bit. UT lost two straight before barely beating Florida at home and only besting LSU by 5. The SEC’s hairiest purveyor of ill-timed verbal gaffes will bring his ugly orange blazer into Rupp with a pretty decent squad but the Wildcats shouldn’t have a problem silencing Rocky Top. As an aside, as much fun as it is to hate on Coach Chest Paint, I like having him in the league. He is a good coach that doesn’t take himself all that seriously and makes basketball more fun to watch in general.

Sunday (2/14/10) –Women’s Basketball – Kentucky at Vanderbilt – ESPNU – 6:00p: This could be a trap game for the UK Hoops team. Vandy has a good team this year and absolutely obliterated Georgia by 22 points a month ago. The Cats will have to remain focused if they hope to leave Nashville with a win. It is possible that if the Wildcats sweep Georgia and Vandy this week that they could crack the top 15 in the poll (#18 in the only poll that matters). Note that the game is on ESPNU, so make sure to tune in.