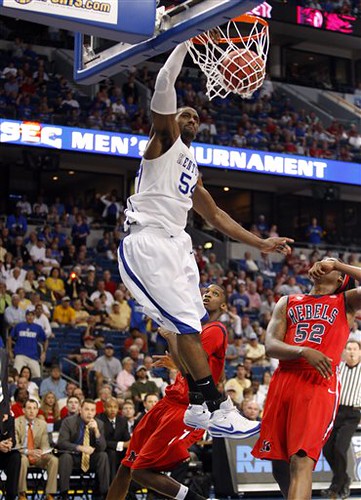 The sports schedule is getting a little hectic. The NFL is in the middle of Super Bowl week(s). High school, college, and pro basketball is running strong. Mondays are good days to plan out your week and make sure you don’t miss any of the UK-related action.

Tuesday (2/2/10)
–Men’s Basketball – Mississippi at Kentucky – ESPN – 7:00p: UK takes the court to defend Rupp against the Running Rebels from the crooked letter state. The Rebs did our boy Pelphrey a solid yesterday by falling to the Razorbacks at home by 7. One could make the argument that they took Arkansas lightly and were looking forward to the game against the Wildcats. This year, Ole Miss has impressive wins over Kansas State, Indiana, and South Carolina. They have also lost to some decent competition the likes of Villanova, West Virginia, Mississippi State, and Tennessee (on the road in OT). What I am saying is this is no push-over game and this year’s squad has the experience and poise to give Kentucky a spirited contest. Expect Andy Kennedy’s team to keep it close before John Wall crushes their very soul. Super Bowl Week Semi-relevant Fact: The official speed limit on campus in Oxford is 18 mph in honor of Archie Manning’s uniform number. The More You Know.

Wednesday (2/3/10)
–Women’s Tennis – Kentucky at Ohio State – 12:00p: The UK Women’s Tennis team was ranked #34 going into this past weekend’s set of matches against the #10 ranked Georgia Tech squad. The Wildcats put a little scare into the Yellow Jackets in the singles event before eventually falling 4-2 agate. I’m not familiar with the word ‘agate’ in terms of tennis as it was used to describe the final score, but I’m going to assume it means ‘overall’. Otherwise, UK lost to a fine-grained, fibrous variety of chalcedony with colored bands or irregular clouding. Tennis is kind of like hockey in using different terms to describe common occurrences in the game. Smash a buggy whip and turn that bagel into a breadstick!

Thursday (2/4/10)
–Women’s Basketball – Mississippi at Kentucky – BBSN/FSN – 7:00p: Apparently, losing to South Carolina is a good thing if you are a Kentucky basketball team. Since the loss to the Gamecocks, UK Hoops has been Sherman-esque in laying waste to the SEC West. The ladies capped off a 2 game road trip with a 10-point win at Mississippi State and return home to battle the other delta-adjacent school. A win here, at Arkansas Sunday, and at Auburn at the end of the season would result in a Wildcat sweep of the SEC West. The TV schedule for Fox Sports (521 Lexington Insight) says this game will be on delay at 9:00p followed by “In My Own Words” with John Calipari. Not a bad way to spend a Thursday night.

Friday (2/5/10)
–Women’s Gymnastics – Kentucky at Georgia – 7:00p: Your 12th ranked Wildcats lost last week to the 10th ranked Arkansas Razorbacks by a little over one point (Wait, can I use ‘agate’ here, too? *looks up UK Gymnastics site* Yup. Looks like it isn’t exclusive to tennis.) agate. I actually like watching gymnastics mostly because I feel like all gymnasts are one step away from being ninjas. All they would need is a little weapon training and they would be like a real life Jackie Chan movie.

Saturday (2/6/10)
–Men’s Basketball – Kentucky at LSU – SEC Network – 4:00p: The alma mater of Hubert Humphrey, Better Than Ezra, and JaMarcus Russell. That is quite a trio. Why am I not talking about their basketball team yet? Because they are absolutely putrid. The Tigers are riding a whopping 7 game losing streak and are winless in conference play. Their last win came on the 4th of January against the powerhouse that is McNeese State and including that win, they are 1 for their last 11 games. They are just awful and play Tennessee at home on Thursday before the Wildcats invade on Saturday. This should be a laugher. To LSU’s credit, I will say that a particular former LSU player is responsible for one of the funnier NBA commercials on the air today:

Sunday (2/7/10)
–Women’s Basketball – Kentucky at Arkansas – BBSN – 3:00p: How good is UK Hoops? As of today, the UK team is #1 in the SEC in scoring offense, scoring margin, steals, and turnover margin. UK is on a roll and their biggest rival, Georgia, has hit an absolute wall, losing their last 3 games and leaving the Cats tied for second in the SEC (I know Tennessee is there, but since UT is women’s basketball royalty, shooting for #2 in the East was the more realistic goal for UK Hoops and one they are close to obtaining). Arkansas is 1-6 in conference and shouldn’t be a problem for the #23 ranked Wildcats (from this point forward, I am no longer recognizing the AP poll and their stupid, stupid refusal to rank the Wildcats. Six teams with more losses are ranked ahead of UK as of Monday morning. Ridiculous.).