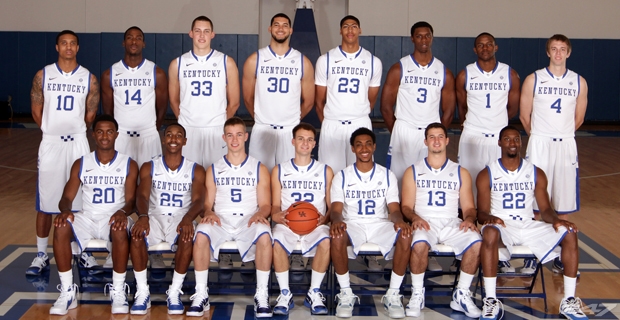 In just three years in Lexington Coach Cal has coached an astonishing 28 different players. Among those 28 guys 15 of them will have gone on to the NBA draft due to the incredible amount of talent and all of the great performances in Lexington. But who would you place inside the top ten players of the Calipari era? In order to rank them I am going to use the CassCo. certified S.L.A.M system of rating players. The SLAM index takes into account Statistics, Legacy, Attributes, and March to determine the rank for each player. So without further ado here is number ten.

10. Josh Harrellson: The big man from St. Charles makes this list the same way he made the NBA, due to an excellent March. Jorts proved that through hard work anything is possible. His game of dodgeball with Jared Sullinger will always be his defining moment.

9. Darius Miller: The native son and only triple crown winner in UK history, Darius Miller undoubtedly left his mark on the program. After being a three year starter Darius accepted coming off the bench his senior season. Miller played with heart and intensity and the incredible legacy of a Kentucky kid playing alongside superstars like John Wall and Anthony Davis. Every kid in the commonwealth wants to be Darius Miller.

8. Doron Lamb- From Queens, NY Doron Lamb will always be remembered for his shooting prowess as he currently ranks first from beyond the arc with 47.52%. Lamb was also capable of putting the ball on the floor and getting to the basket but for some reason would rarely dunk. Statistically he will be known as one of the best shooters to set foot in Lexington.

7. Terrence Jones- There were times during both Terrance’s freshman and sophomore year he looked like the unquestionable player of the year. Then there were times when he seemed to be completely checked out. Jones had the size and skill to dominate the post and his return for a second year of college was a major component of UK’s eighth title.

6. Patrick Patterson- Patterson may have saved UK from complete disaster. The PF from Huntington spent two years under Billy Clyde and was one of the few high points of some abysmal seasons. Patrick’s third year things changed. With added superstars he was no longer required to be the go to guy but he still had a lot great games. He will have a lasting legacy as the guy who stayed. Through bad times and then good and kept the program from going off the rails. Seeing P-Pat achieve his dream of playing in the NCAA tournament was a great memory of the 09 season.

5. DeMarcus Cousins- Cousins was more like a force of nature than just a center. Once he got the ball on the block he was going to find a way to score. Plus his greatest attribute was his personality. UK loved DeMarcus while every other fanbase despised him. His infamous call me to Miss State fans was one of the funniest moments in recent UK memory.

4. Michael Kidd-Gilchrist- MKG is a winner. Simply put, the guy does whatever it takes to achieve victory. He also had a bit of John Wall in him because if he was driving down the court you knew he was going to score. He had a great March capped off with his second half barrage against Lousiville. MKG will always be a favorite for his heart and intensity, a true warrior on the court.

3. Brandon Knight- Brandon Knight tried to hit the game winner several times on the road during the SEC but came up short time and again. That is, until March. His shots against Princeton and Ohio St  sparked an incredible March run that resulted in the first final four in 13 years. Knight had an incredible freshman year with  657 points, the most of any player under Cal and good for 12th in a single season.

2. John Wall- Wall might be perhaps the most skilled point guard to ever play for the Cats. He possessed incredible speed and athleticism that made him unstoppable in the open court. Wall was an absolute rock star during his time at Kentucky with people going crazy over the John Wall Dance. Imagine if there was some sort of four year college rule and Wall would be entering his senior season. Unreal.

1. Anthony Davis- Statistics: All time leading shot blocker, second in field goal percentage. Legacy: Consensus Player of the Year. Attributes: Grew to be 6’10 after learning to be a point guard. An unstoppable combination. March: Final Four MOP despite only scoring 6 points in the championship. No matter which way you look at the SLAM rating Anthony Davis is incredible. He is the best player of the Cal era and one of the best to ever play at Kentucky.

What do you think? How would you rank your top ten? Should I have included Eric Bledsoe or Deandre Liggins? Let me know in the comments or on twitter @ACassady_KSR. Thanks for reading and be sure to check KSRcollege!

68 Comments for The Top Ten Players of the Calipari Era