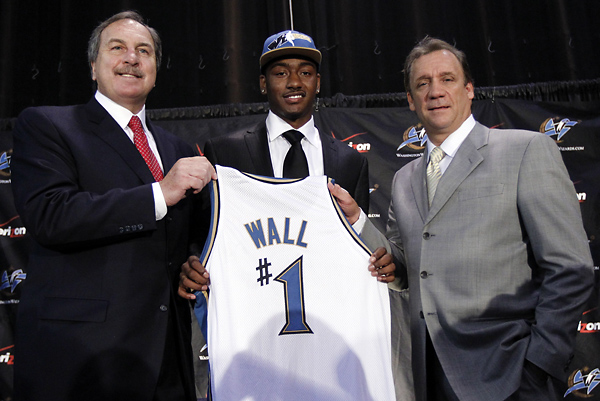 As the Andrew Wiggins sweepstakes winds down (or so we hope), the final four schools in the running have pleaded their case for landing the class of 2013’s top prospect. After drawing comparisons to LeBron James, and being labeled as a sure-fire lock to go as the #1 pick in the 2014 NBA draft, it’s easy to say that no matter where Wiggins plays his college basketball– the utmost success will surely follow. While most believe this to be true regardless of the choice Wiggins makes, not every top 3 prospect in the last 4 recruiting classes has stayed at the very top as they make the transition from the NCAA to the NBA.

John Calipari and Kentucky have likely pitched a number of reasons why Kentucky should be the final destination to Andrew Wiggins. All of the reasons are likely enticing, but perhaps the most important part of the “Kentucky/Cal Effect” in regards to Wiggins has to do with Calipari’s ability to groom THE BEST of the best, not allowing them to slip. Kentucky and Calipari have only helped beef up the resume’s and marketability of the top players who have come through the program. Just look at the evidence…

Since arriving at Kentucky, John Calipari has coached six of the top-3 rated recruits (according to either Rivals.com or Scout.com) in their respective classes. The six top-3 rated recruits were John Wall, DeMarcus Cousins, Enes Kanter, Anthony Davis, Michael Kidd-Gilchrist and Nerlens Noel. Depending on the service, Wall, Davis and Noel were all THE top-rated prospect in their class coming out of high school. If everything goes according to plan in this year’s draft, all 3 of those #1 rated players coming out of high school will have been selected with the #1 overall pick. As a top player, you can’t ask for a better track record.

Top Players who chose somewhere other than Kentucky:

The top-rated players (again, depending on which recruiting service you choose) who decided to attend college somewhere other than Kentucky since Calipari arrived in Lexington were Harrison Barnes, Josh Selby, Austin Rivers and Shabazz Muhammed.

– Harrison Barnes entered college basketball as one of the most hyped players in years. Barnes was nominated for all kinds of pre-season All-American and National Player of the Year awards. In his freshman season at North Carolina, Barnes struggled to assert his dominance in college basketball. Even though his draft stock was high, Barnes elected to stay for his sophomore season at North Carolina, where he went on to earn Second-Team All-American honors. Barnes, who was one time thought to be a lock for a top 3 draft pick, ended up being drafted 7th overall in the 2012 draft.

– Josh Selby was rated as the #1 player in the 2010 class by Rivals.com, although Scout.com had him rated as the 5th best player. Selby attended Kansas, but had a rather uninpsiring freshman campaign. Selby had to sit out the first 9 games, and then struggled with injuries throughout the rest of the season. Selby averaged only 14 minutes per game following the injury, putting up 7.9 points per game. Even following a mediocre college career that last only one season, Selby decided to enter the NBA draft. Selby was selected in the 2nd round with the 49th overall pick. Selby is currently a regular in the NBA’s D-League.

– Austin Rivers had a solid freshman year for the Duke Blue Devils, but was part of a team that fell in the first round of the NCAA tournament to a #15 seed in Lehigh. Rivers averaged 15.5 ppg for the Blue Devils. Rivers was able to prove himself as a scorer, but didn’t grab the praise and attention many expected he might in his single collegiate basketball season. Rivers ended up being the 10th overall pick in the 2012 NBA Draft.

– Shabazz Muhammed decided to stay on the west coast by attending UCLA. Muhammed’s talent unfortunately never translated to national stardom, as the spotlight was rarely on his UCLA team or its 10 p.m. tip-offs. Muhammed was at one point considered the favorite to hold the #1 draft spot in 2013. Now, the projections generally place Muhammed in the Top 10 (but toward the end of the Top 10).