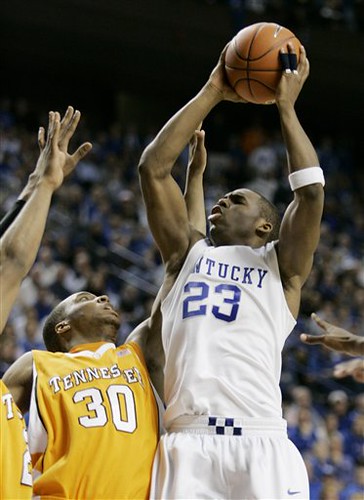 Where was this guy yesterday?

-The quote of the day yesterday, and one most fans were uttering repeatedly to comfort ourselves, was the one Calipari voiced in his post game press conference, “You shoot two for 22 and it’s 65-65? Wow.” As all Cat fans that know their history realize, it is much better to get the statistical anomaly game out of the way during the season rather than in tournament play.

-I typically don’t like to self-link (I hear it reduces fertility and increases your chance of hemophilia) but if you didn’t watch Cal’s post game comments, you really need to take a gander. First, where was this done? It looks like he is sitting in the corner of a high school cafeteria. Second, and more importantly, he once again said all the right things. Ramon is going to play more and the AAU angle makes sense. Coach marvels at UK fans ability to infiltrate the enemy confines then breaks down the types of plays that caused them to lose. I love the analysis of what can happen when you take a wide open 3-pointer. Great stuff.

-If you didn’t know, you can get the John Calipari Call-In Show on iTunes. Here is the link.

-Ryan Clark makes some great points and will make you feel better about the game yesterday.

-Can someone get the Associated Press (and/or the Indiana Times) on the horn and explain to them the difference between DeMarcus Cousins and Patrick Patterson, please? Thank you.

–Here is a pretty neat profile of a UK fan/graduate that is living Big Blue proud down in Mississippi.

-Freedom Hall officials have contacted the University of Kentucky about playing some games in the arena after U of L moves into new digs.

-A USC columnist provides a pretty decent breakdown of the SEC MVP race and concludes that the only way Devan Downey wins is if Wall and Cousins split the vote. Warning: There are copious amounts of red items on this site.

-Here is a pretty good break down of what yesterday’s win (as well as Florida’s loss) meant for Tennessee in terms of the SEC.

-In the ‘Just Because I Thought It Was Interesting’ department, apparently there is some. . . hesitation. . .on the part of Sam Bradford when it comes to being drafted by the Redskins. Bradford is 1/16 Cherokee and a reporter thought Sam would have some sort of righteous indignation over the Washington moniker. I did not know that Bradford was part Cherokee and the biggest question I have is, should he not have had a sports scholarship, could he have gone to school for free? Looks like the answer is no as most applications require applicants to prove 1/4 Native American.

It’s morning in Kentucky, everybody.