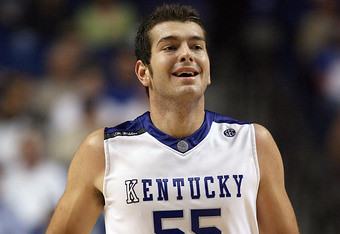 I remember going to Midnight Madness (I will always call it that. You can’t make me change.) last year and telling my buddy that I thought one of the key players would be Josh Harrellson. The way I figured it, his size and ability to stroke the 3 would make him a perfect fit for the dribble drive offense. With Wall and Bledsoe slashing to the hoop and Boogie and Patterson down low, Josh seemed like the best kick out option for a trey. I mean, how many guys in college are 6’10 and draining 3’s? I thought he’d average double digit points per game and the world would come to know and love Jorts as much as the KSRmy. Too bad it didn’t happen as Harrellson played a total of 88 minutes last season.

Well, looks like my prediction has life albeit ill-timed and misconceived. We all have heard about the Jorts off season work out program and his desire to significantly improve his production during his games in China. Now, he will quite literally be the center of attention during the Cats tour through Canada. As Larry Vaught reports, Harrellson has regained his confidence and is more than willing to do whatever Coach Calipari asks of him. He hints that it will probably be to relieve Enes Kanter, but if he shows coach a few things during this trip he might have a more stable position on the team working around the rim rather than behind the arc.

Also in Vaught’s post (Tangent!), an item that will tickle every old-school basketball fan (and lovers of Sam Bowie). Josh talks about how Enes Kanter keeps the ball up high and away from the defender. If I had a Canadian quarter for every time an old guy complained about UK centers and forwards that “brought the ball down so those dag gum little guards could steal it”, I’d have enough money to get Drew Franklin his own room on the KSR road trip (Word is, Matt is making him sleep on the floor in their room at the Canadian Embassy Suites). Good stuff.