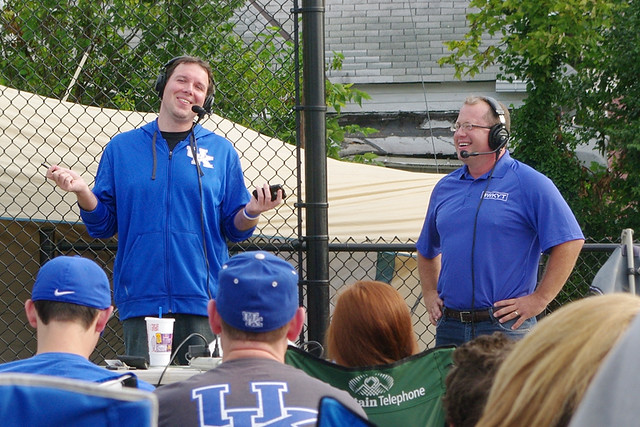 If you listen to the radio show every day you knew this article was a long time coming. When Tom Eblen’s column was going to drop many, including Matt himself, wondered just what tone the piece would take. Would it be a crushing expose on Jones and KSR? Would it be a trumpet of success for the future of sports media? Well it turns out you get just a little bit of everything.

We all know Matt Jones the blogger, host, and personality but few know about Matt Jones the person so Eblen provides a bit about the origins of both Jones and KSR. The article also digs into some of the recent controversies our site has been embroiled in over the past few years which Jones addressed as such:

Part of the tension between Jones and others in the press box stems from their radically different views about the role and ethics of news media in college sports. Jones said he appreciates good journalism, but he’s running a business.

“In no other business is it the case that not giving the consumer what they want makes sense,” Jones said of journalism. As an example, he cited the Pulitzer Prize the Herald-Leader received in 1986 for exposing cash payoffs to UK basketball players, a scandal that led to major reforms in the program.

“To the average fan, that’s the worst thing you all have ever done,” he said. “My goal is not to win the state journalism award. My goal is to make the consumer happy.”

All in all it’s a good read and a fair look at how KSR and Jones transformed into a media juggernaut over the last 8 years. Check it out in print or online.

[With fans and the media, Matt Jones and KSR stir passions in Big Blue Nation]