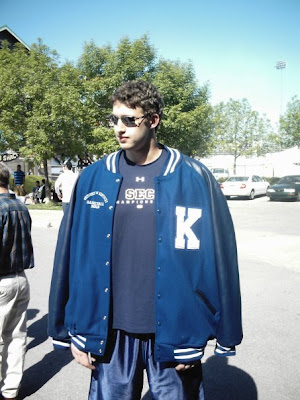 It was meant to be. From the day he left the beautiful city of Lexington to head to the mean streets of Ithaca, the dye had been cast. Mark Coury vs Kentucky was most certainly destiny. For those of you that dont remember Mark “Every day is Senior Day” Coury, he was unofficially the most awesome player in the history of Kentucky basketball. Coming from the hard neighborhoods of Country Day High School in Detroit, Coury came to UK as a walk-on under Tubby Smith, an added player to help the team in practice and with the GPA. When Tubby left, Clyde took a liking to the Coury Flurry, and next thing you know, he was the most improbable starter in UK history. He basically started almost every game his Sophomore year, perplexing the fans in ways that seem like crazy, distant memories. I liked Coury for three reasons:

(1): His Unbelievable Self-Belief: From the moment Coury got in the game, he was convinced it was “go” time. As soon as the ball went in his hands, it was going up, result be damned. The results were usually not stellar, but nothing wavered that confidence.

(2): His bizarre personality: Ask any UK player, past or present, about Mark Coury and they will all echo the feelings of Michael Porter at a podcast earlier this year. “I like Mark a lot..but he was a weird dude.” Coury was amazingly popular with his teammates, but all found him to be just a tad bit strange, to say the least.

(3): How He Left Kentucky: When Coury left, the story from the Gillispie folks was that he wanted to go play somewhere that would give him a scholarship. We all accepted that as fact (as we did many things from Clyde), but now we know that he left because (in his words) “the coaching situation was a little strange there.” To say the least.

I want Kentucky to pound Cornell into the ground. While I like the Big Red, nothing gets in the way of the Big Blue. But I am not going to lie. I am looking forward to seeing the Coury back in action. No player in recent UK history has provided more laughter and great absurd moments for the KSR crew than the man we once called Napoleon Dynamite. He is a great kid, with a great work ethic and a 4.0 GPA. He is part of that odd assortment of players known as the Billy Clyde era and I cant wait to see him on Thursday. But I do want Boogie to throw it down on him at least once…but its not personal.

— UK got Cornell as its opponent and then later found out that it will play at 10 pm on Thursday night in Syracuse, with the great Dick Enberg and Jay Bilas on the microphone. The destination means that there will likely be a big Cornell following at the game and it will likely feel as if it is a road game for the Big Blue. Cornell is only 45 minutes from Syracuse and most of the graduates stay in the NYC area. As a friend of mine who is a Cornell grad told me tonight, “this is the biggest athletic moment in the school’s history. Every alum I know is going on their Cornell pilgrimage.” Expect quite a scene of Red….but I do think Blue shows up too, because it always does.

— I am a big believer in the fact that we should not worry about the future NBA decisions of any players until the season ends and we have celebrated the National Title that Ali and his Northern Iowa boys so desperately are trying to give us. BUT, I did speak with two people this weekend who tell me that the talk about Daniel Orton is much more than just idle speculation. When Calipari brought up the possibility of Orton going pro earlier this week, I dismissed it. But two sources very close to the program told me this weekend that there is a lot to that possibility. “He wants to go” one of them said, “and there is a good chance someone would take him in the first round. I dont think it is certain that he leaves, but it will definitely be a consideration.” I was shocked by this news, which is why I talked to a couple of people about it, but both told me the same thing. Crazy stuff and a decision that I firmly believe would be a bad one.

— You take the bad with a dose of good however as one of the same sources told me that it will be a “great haul in the Spring for UK in recruiting.” I am told that two players have already told UK they are coming (my assumption is Kanter and Knight, although Evan Daniels who I think does as good a job as anyone believes Knight has not told anyone anything) and that they expect at least two other “top players to come with them.” This jives with what I have been hearing and is part of my general belief that whenever these dominoes start falling for UK, they will fall quick and be quite impressive.

— Recruit Elisha Justice as a walk-on to Kentucky. This is a train I am going to be on a lot in the coming weeks, so just get used to it. The program needs Kentucky kids like Elisha as walk-ons and he is a good one. This will be my bandwagon…just warning you.

— The UK women’s team plays Michigan State tonight at 7:30 in the Second Round of the NCAA Tournament in Louisville. You should go see the game live and if you cant, watch on ESPN2 as the ladies try to make the second weekend of the tournament for the first time in a long time.

— One more thing to get used to…we will see a lot of comparisons between Cornell and UK over the next week in the national media, most of which wont be favorable to the Cats. Just so you know, if elitist Northeastern writers try to play the Ivy card as either a “they do it for the right reasons” or “Kentucky is full of rednecks” type of piece, I will explode and unleash the fury on them. If you see it, let me know. I know its coming and I have my vitriol ready.

We have a lot of news coming today, including a story about one of our writers, an LA lawyer, a star of the adult entertainment business and a Sunday full of fun talks. You dont want to miss it….