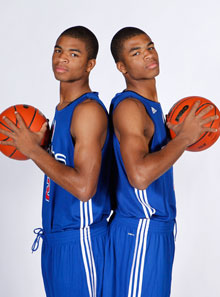 Aaron and Andrew Harrison, two top five prospects from 2013, were in Pittsburgh over the weekend for the Pittsburgh Jam Fest. Their Houston Defenders squad lost 72-61 to the eventual champion in the semifinals, but it was what they said after the game that has people in the basketball recruiting world talking.

Andrew, Scout.com’s No. 3 player in the class, told NBCSports.com that Kentucky, Maryland, Baylor, and Villanova are the top four schools they are considering. “But that doesn’t mean another school can’t come up,” he added.

Aaron, Scout.com’s No. 5 player in the class, then confirmed that the similar-looking duo from H-Town is a package deal. “One-hundered percent,” he said.

Although their team couldn’t bring home the 2012 Jam Fest trophy, their individual performances did not go unnoticed.

19 Comments for The Brothers Harrison have four favorites