With Drew Barker’s commitment yesterday, Kentucky has now landed 3 4-Star players, and 5 players who are ranked in the Top 25 of their position in the country. Now normally that’s a solid recruiting class for Kentucky, but there are even more top-flight players who are still looking to don the Blue and White. These are the 5 recruits that I believe are the most important for UK at the moment, although as the staff begins to develop more relationships and with Barker spreading the gospel of the Big Blue Nation around the country, more elite names may start to show some attention to UK.

Matt Elam is probably the next biggest recruit for Mark Stoops and Co. for the simple reason that behind Barker, Elam is the highest rated recruit in the state of Kentucky. Alabama has reportedly told Elam that they’ve evaluated him as their top target at DT, and holding off a charge from Nick Saban, who is the John Calipari of football recruiting these days, will be a huge test for the young staff to try and keep one of the state’s best home.

Neal Brown has made it perfectly clear that the team is short staffed on WR’s at the moment. Brown wants at least 12 scholarship receivers on the roster to run his offense and landing Berrios will give Kentucky a great fit at the slot receiver position alongside Ryan Timmons, Jeff Badet, and Demarco Robinson. Big key in this decision is Drew Barker’s friendship with the 4-Star wideout, and named him personally as someone he was going to try and convince to don the Blue and White. Berrios has 17 D-1 offers from schools like Clemson, Georgia Tech, North Carolina, South Carolina, and Tennessee among others, and Braxton is looking to visit Lexington sometime over the summer.

Another WR for Coach Brown to play with. Kief has been rumored to be a UK lean, due to the relationship he has formed with other Ohio UK recruits on his visits. Kief also is teammates with 2013 UK commit Jaleel Hytche. Kief is a big, lean, receiver who will be a deep threat on the outsides in UK’s offense with his great straight-line speed. Kief holds offers from programs like Alabama, Notre Dame, West Virginia, and Ohio State. Of the players on this list, Kief seems like the most popular choice of “Who will commit next?”

With 2 4-Star RB’s in Mikel Horton and Braylon Heard already on board for 2014, adding a 3rd would be crazy right? Not so fast, the addition of Williams would be an absolute game-changer for the Wildcats, because as his nickname “Boom” suggests, Stanley is an EXPLOSIVE athlete. He has the ability to line up as a slot receiver, or play out of the backfield, but either way, he’ll be bringing his sub-4.4 speed with him. Williams is being recruited by a who’s who of college football including Georgia, Clemson, LSU, and South Carolina, but according to some reports, UK stands a much greater chance at landing the 4-Star RB then some might believe. Georgia will be tough to beat out, but along with the Bulldogs, Clemson, Tennessee, LSU, and West Virginia seem to be the ‘Cats’ biggest competition. 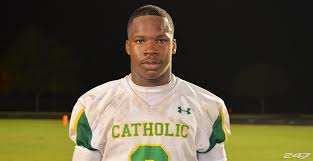 Stoops and D.J. Eliot have made the defensive secondary and the D-Line their main focus over the course of the 5 months they’ve been here, but Purifoy along with Dorian Hendrix would provide the staff a solid combo at the ILB position to move forward with after Avery Williamson graduates this season. Purifoy is currently a Florida State commit but has long been rumored to still be open in his recruitment, with UK still maintaining a chance to flip the 4-Star LB. Along with UK, FSU will have to fend off Auburn, Miami, and Ole Miss among others to keep his services. If UK manages to flip Purifoy’s commitment it would be a huge step toward shoring up the LB corps. for the next 4 years to come.

32 Comments for The 5 Most Important Recruits Going Forward