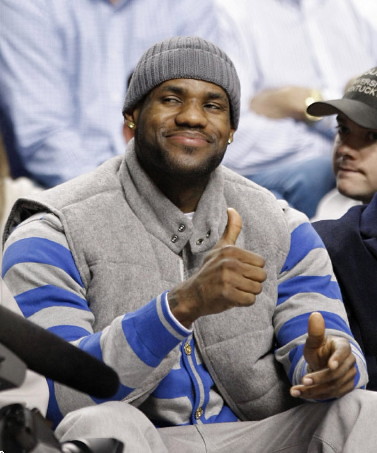 Lebron thinks the Wildcats are gonna be juuuuust fine.

The big topic of conversation lately regarding the Wildcats has been their outside shooting. To be more accurate, the team’s lack of outside shooting has been a huge concern. Nearly every media outpost has some reference to the terrible shooting percentage the Cats have been demonstrating since the beginning of February. For instance:

-Gary Parrish detailed all of the Wildcat clunkers during the Tennessee game.

-Jeffrey Tomik gave the Big Blue a round of Jeers for their low shooting percentage and made the claim that you can’t win a title with freshman leaders.

-Jason Brubaker details the tribulations of the Wildcats shooting (35 of 145 since February 1) and predicts a emotional rollercoaster for UK fans in March.

And on and on. Thankfully, John Wall and DeMarcus Cousins have both responded to the criticism. In an article by Keith Taylor, Wall states:

“We shoot the ball well – we show it every day in practice. We’ve just got to come out and make shots for the team to win. I’m not really worried about our shooting.”

So the guys are taking it in stride and aren’t freaking out about it, but they realize it is an issue and vow to work harder in practice to correct it. Nice. Can’t ask for much more than that. I’m pretty sure that, despite Tomik’s claim, this is precisely the type of mature reaction that can translate to titles in March.