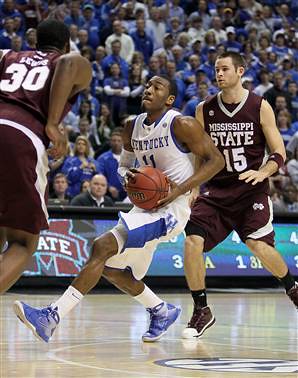 There has been some debate this year regarding the importance of conference tournaments. Our own John Calipari stated on record that he wasn’t all that concerned about the SEC tournament and his focus was on the NCAA. Many have accused Jim Boeheim of not taking the Big East seriously and have speculated that he didn’t go all out because he wanted to rest his team for the Big Dance.

There are a few things that immediately stand out:

1) There have been zero, none, nada, zilch, no NCAA champions over the past dozen years that haven’t either won their conference tournament or at least a share of their regular season title. Remember that when you are tempted to choose Baylor, Marquette, Pittsburgh, Villanova, or Kansas State as a surprise winner in one of your brackets.

3) Of the 8 dual tournament winners, 6 of them also won at least a share of their regular season.

4) If you aren’t from the ACC, Big East, Big 12 (barely), or SEC, you might as well be curling because those conferences have owned the Big Dance for over a decade.

Just looking at those facts has to make one think that these coaches know what they are talking about. While winning the conference tournament is an indicator of NCAA tournament success, a much more relevant indicator is whether or not you won all or part of the regular season title. This also means means UK, Syracuse, Kansas, Duke, and Maryland (all of whom won part or all of the regular season of the big 4 conferences) have the inside track on teams like West Virginia. It also bodes well for the teams that swept both conference distinctions: UK, Duke, and Kansas.

As an additional and completely unrelated note, if you haven’t visited Bracket Beast yet, you really need to. The site takes stats you think are relevant and creates an NCAA bracket for you. Users are even able to configure their own stats that you can use as well. For instance, some UK fan out there (one full of awesome) created a stat for ‘Demarcus Cousins’. Everybody has a 0% except Kentucky which, of course, has 100%. Good stuff.