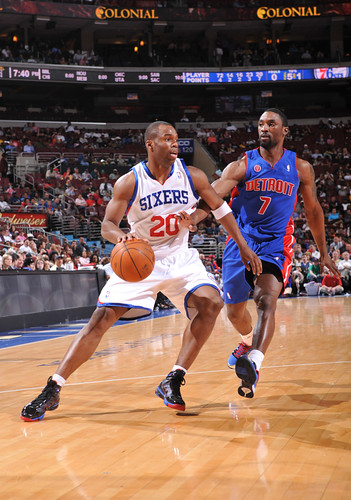 We have some NBA heavy links for you on a beautiful Sunday morning.

-Chuck Hayes is bad at picking brackets, but apparently good at singing.

-Keeping with the Chuck-ster, Scout/Fox had a 5 part series with the Chuck Wagon last year where he talks about the NBA and UK. Part one is free, the rest you gotta pay to see. I post it because the comparison to a different UK forward makes it worth a re-read.

-As we remember one forward that loved UK, the big news obviously is another forward who loves UK and might stay for another year.

-A UK fan tells Larry Vaught why Patrick Patterson should stay another year.

-The Hornets like Patterson and this whole notion of him staying in college isn’t something they particularly enjoy.

-The 76’ers are hitting threes at almost record pace these days. I wonder if a certain former Wildcat has anything to do with that?

–Final tally for John Calipari and his Makers Mark bottle signing? 1,200. HAND CRAMP! That is a lot of bourbon that is going unused.

–Taylor Swift is coming to Rupp and John Calipari is seriously thinking of using her as a recruiting tool. Really? No. Not really. Just seeing if you were paying attention. She is coming to Rupp, though.

-Pacer fans really like the cut of Demarcus Cousins’ jib. The real question is: Can he sing?

-Looks like the Timberwolves would rather have Evan Turner than John Wall so much so they might trade down should the Nets select Turner over Wall. That is what we call a ‘be careful what you wish for’ situation.

–This page is one of the best, most comprehensive lists of all the players that are getting ready for the draft and information/advice about each one. I’ve been looking for a link like this for awhile.

That should get you started on a day that will be loaded with UK news from all over. From football to golf to baseball to gymnastics to basketball, there is a lot going on with UK this weekend and I’ll be around to usher you through it. Now. Get outside and take in some Vitamin D.