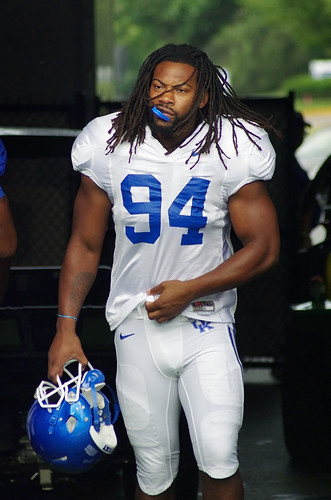 Za’Darius Smith has been wearing a protective boot since rolling his ankle during the first week of fall camp. Originally believed to be a minor injury with the boot serving as a precaution, now we’re hearing the injury is a little more significant than originally expected and could keep him out of Kentucky’s first game.

Stoops said today that he’s worried about Smith and cornerback Cody Quinn due to their “aggravating ankle injuries.” There’s a chance they won’t be ready to go in 11 days, but they’re trying to get back out on the field.

If Smith can’t go, defensive coordinator D.J. Eliot mentioned TraVaughn Paschal and Farrington Huguenin as two guys playing well as of late. Jason Hatcher is another guy that’ll get some looks, too.

8 Comments for Stoops worried about Za’Darius for the opener