The Master of the Macabre. The Sultan of Suspense. The King. When it’s all said and done Stephen King will likely be remembered as one of the greatest authors of the past century. The man has written over 50 novels which have done over 350 million in sales. That’s enough books to put one in the hands of every person in America. With his diverse and interesting work there is sure to be something in his work that each one of those people would find entertaining. From The Shining, to the Green Mile, all the way to the Dark Tower King’s work has made a siginificant influence on pop culture. Stephen King turns a nice 66 today and here’s to another 65 years of pulse pounding entertainment.

If nothing else we can thank him for giving us the influence for the Nothamton Clown. 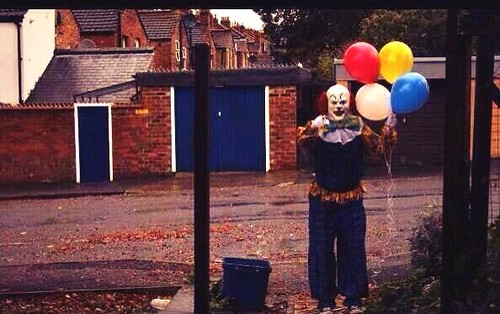 On to the News and Views:

-Welcome to the bye week. With the record of 1-2 the Cats now have a one week break before finishing the guantlet of ranked opponents. First up will be the Florida Gators who many are calling to be on upset alert for next weekend. We’ll know much more about the Gators following their game against Tennessee. Could we finally take down UF for the first time in my life?  The opportunity may not get better than this one.

-Already bored from the bye week was one James Young who decided to jump into his time machine and nap throughout time.  Fans really knocked this out of the park and provided a nice little distraction as we eagerly await big blue madness. In just four weeks the new Kentucky Wildcats will make their debut and kick off the revenge tour.

For those of you interested in camping out, you can begin camping out on October 2, no earlier than 5:00 a.m.  UK asks that all campers set up their forts in an orderly fashion with respect for the neighboring campers. If you act up, you’ll be removed from the line.

Meanwhile Coach Cal has been doing a bit of globetrotting to put in work on the Cat’s next few classes. Scroll on down to see where Cal has spent the last couple of weeks

-After the Browns decided to tank their season in an attempt to land Bridgewater perhaps other teams will plan on following the NBA tradition to land Randle. One man who shares that view is Drew Corrigan who says tanking NBA teams should target Julius Randle in next summer’s draft. Corrigan writes:

“Randle competes and plays like an animal on the court. He has the size of a lion, with the heart of one to complement. He loves to attack the basket and smells when opponents fear him. Unlike Wiggins, who has been criticized for the lack of a killer instinct, Randle definitely won’t have this problem. He will keep going and keep attacking until he’s satisfied. The guy is fearless.”

Can we please just see him play. The hype level is reaching unparallelled heights and I can’t wait to see Randle make every other player in the nation look silly. It’s going to be a fun year.

I’ll be back in the morning to bring you all the latest news on the final weekend without major UK sports for a long long time. Enjoy your night BBN!