How does something as big as the creator of the most important titles in comics history coming to my state get by me? I must be slipping in my old age as, the name amongst names, Stan “The Man” Lee is in Louisville this weekend for the Fandomfest Comic and Toy expo. Stan Lee needs no introduction as he is the modern day Aesop and creator of  characters like Spider-Man, the Hulk, the X-Men, the Fantastic Four, Iron Man, and Thor. Some of the biggest characters in today’s pop culture and icons that helped shape my childhood. Their creator is in Kentucky and I won’t get the chance to meet him. With Lee at the ripe age of 90 I can’t imagine having too many more chances.

So it goes as you get older and take on more responsibilities. So here’s the news and views dedicated to one Stanley Martin Lieber and all the questions I didn’t get to ask today although I’m sure it would have been exactly like Mallrats

-The first big event of the day was the commitment of 3 star wide receiver Garrett Johnson out of Winter, Garden Florida.

I’M OFFICIALLY COMMITTED TO THE THE UNIVERSITY OF KENTUCKY! #BBN!

The 5’10 168 lb. WR picked the Cats over offers from Arizona, Boston College, Cincinnati, Georgia Tech, Northwestern, Connecticut, South Florida, and Marshall. His commitment puts the Cats at number 4 on the Rivals recruiting rankings behind Tennessee, Florida St, and Miami. Justin Rowland of Rivals tweeted the Cats still plan to add three or more 4-star recruits before signing day. Talk about some great rolls in Yhatzee!

– The other news of now was of course the UK Football Women’s clinic which drew a record crowd of over 500 ladies to learn a bit about the new era in Kentucky football. The girls of Big Blue Nation were given an intro from all of the new coaches and got to meet some of the new players who took the chance to show off their :ahem: new uniforms: 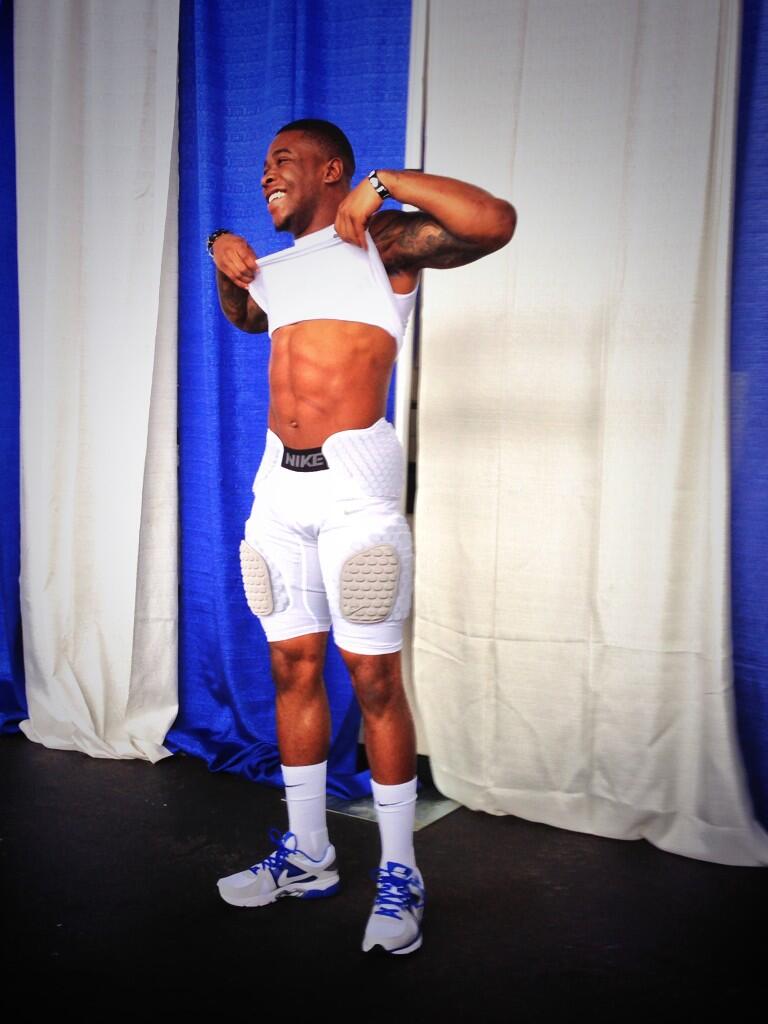 -One nugget to come out of the women’s clinic was about Erik Korem and the new strength and conditioning program at UK. Earlier in the spring we heard about small changes to the team’s nutrition plan and the idea to install eat this not that choices at all the local establishments. Things like that are what has made the new high performance / sports science program begin to stick out in Lexington. It’s the only one of its kind in college football and something that has caused NFL team to inquire do to the focus on individual and position strength training. Korem said today “We don’t rise to the level of our expectations, we fall to the level of our training.”

-Some news on Special Teams as the group of players formerly known as “Special Forces” has been renamed the Krazy Kats and will be lead by Coach Peveto. Peveto said he “about cried” when Stoops called on him to lead the boys. In response he crafted a simple motto:

1. We have one play to be perfect

2. We do hard things better

3. We are the tip of the spear

-Neal Brown made an appearance and fired up the crowd with the sound of the air raid sirens blaring through commonwealth. Brown expressed his excitement to be back in the bluegrass and played to the home crowd with this quote “I like bourbon over whiskey, and I know the difference. I put my hand over my heart for MOKH.” He also wasnt ready to put an end to the quarterback question as he said “All three have traits we can score points with and be productive.” Keep on waiting.

Brown also took a moment to lay out the Air Raid philosophy:

3. Get the ball to playmakers in space.

Only four more Saturdays until football is back!