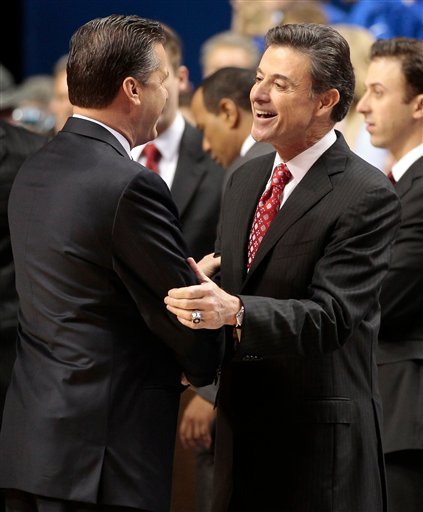 The grandfather of college basketball writers, Dick Weiss, has a nice piece on the relationship between Rick Pitino and John Calipari. Weiss recounts the history between the two coaches, which infamously started with Pitino recommending Calipari for the UMass job in 1998 and donating $5,000 from his own pocket to cover part of Cal’s first-year salary. Weiss says that over the years, the friendship morphed into a personal rivalry during Cal’s days at Memphis, and now with Cal at Kentucky and Rick at Louisville, they have formed “an uneasy truce”:

Pitino used to play with a stacked deck when he was at UK.

He coached the ’Cats to one national title and three Final Fours from 1993 through 1996 and his 1996 title team had nine pros on the roster. But Pitino has never been able to duplciate the success he had at Kentucky and has found himself chasing the 52-year-old Calipari, who has coached the ’Cats to an Elite Eight and a Final Four. The assembly line is in place and it shouldn’t be long before Calipari starts hanging national championship banners at Rupp.

Pitino will watch from a distance as the program he helped rebuild from the ashes marches on.

That almost makes me feel sorry for him.