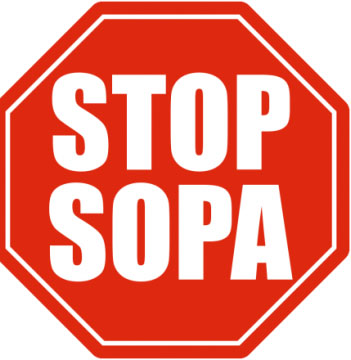 Ah, the Stop Online Piracy Act. The proposed bill is out to shut down online copyright infringement by restricting access to sites that host or facilitate the trading of pirated content — or basically the whole Internet. If passed, SOPA will directly affect everything you do on the Internet, from KSR to YouTube to Twitter to Spankwire. It’s all in jeopardy.

So, in honor of SOPA, here are your afternoon Notes and podcast with a little bit of copyrighted material mixed in. If they’re taking us to jail, I’m going out swinging.

— Did last night’s big win mark the beginning of Kentucky’s dominance? Sure, the Cats are 18-1, but last night’s game was the first time we’ve seen the Cats firing on all cylinders since they beat UNC. We’ve been anxiously waiting for the day this team lives up to their potential, and it might finally be here. I know it was just one game at home against a mediocre team, but if UK puts it together again against Alabama on Saturday, look out SEC. Keep rollin’, boys.

— Download Rihanna’s Talk That That for free here on Pirate Bay. Just a heads up though, you could get a virus or go to jail.

— According to Adam Zagoria, Shabazz Muhammad is seriously considering UNLV:

“I think Shabazz is really considering going [there] because he feels that they’re a great team and everyone else sees that, too,” the UNLV-bound Morant, a 6-foot-8 power forward, told Five Star in the above video. “And they’re ranked in the nation.

“At first he wasn’t thinking about going there because he thought they wouldn’t be that good and he wouldn’t be looked at by [NBA] scouts. So he was mostly considering Kentucky, but now UNLV is in the top three.”

UNLV is a program on the rise, especially with the recent addition of Khem Birch, but a player like Shabazz would be absolutely crazy to not go to Kentucky. He’s the picture-perfect player for Calipari’s NBA farm system in Lexington. I think he’ll be a Cat and the staff is confident that they’ll get him.

#TheAwkwardMoment when you do the “Zelinski Autoparts” commercial from Tommy Boy too loud and Dan Akroyd actually overhears. I #LaughedItOff

I see you workin’ in Hollywood, big fella!

— Watch full episodes of The Real Housewives of New Jersey here. Just a heads up though, you could get a virus, go to jail or lose a lot of friends.

— Congrats to our own Matt Jones for receiving a 2011 Rootie for Best Political Blogger. In the award presentation on their website, the Barefoot & Progressive blog called Matt the “King of All Kentucky Media” and said he will probably be governor one day. That’ll be the day I move to Ohio. A man can only take listening to Werewolves of London for so long.

— Remember Randall Cobb’s kick return? It was so awesome. It’s also property of the NFL.

— It’s a sad day for all you Indianapolis Colts fans, according to Rob Lowe (yeah, the actor), Peyton Manning will retire. Remember, that’s coming from Rob Low.

— It’s also a sad day for all you Toccoa Falls basketball fans out there. The Eagles lost to Western Carolina by 102 points last night. They were down 72-17 at halftime and lost 141-39 in the end. It’s only the fourth time a D-1 school has lost by triple-digits.

— Get your podcast after the break…

30 Comments for #SOPA Wants Afternoon Notes and a Podcast