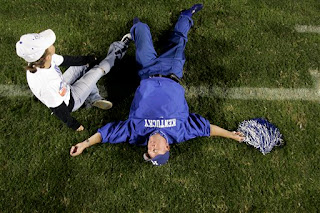 Great news, folks.  The Beisner Cook-out was a success and, although Bomani wasn’t able to make it, a good time was had by all.  I’m ready to pack it in for the night, but I’ll leave you with a little something before I hit the sack.

– Tonight was the annual UK Fan Day at Commonwealth Stadium and, after three straight bowl wins, Rich Brooks and Co. were privy to the largest crowd ever at a Fan Day.  Kentucky fans have always been tremendously loyal throughout a history that’s not exactly filled with high points, but the Rich Brooks era has seemed to sustain quite a bit of momentum and, even though there are tons of question marks entering this season, the buzz is still around the team.

– The injury bug did hit a bit today as DeQuin Evans was held out of practice with a hamstring injury and the new belle of the backfield, Alfonso Smith, will be in a boot for a day or two.  However, neither injury appears to be a major one.

– Speaking of Evans, Brett Dawson takes a look at how Evans and Chris Matthews ended up at UK after playing together at a Los Angeles junior college.

– Also, Rich Brooks heaped a lot of praise on a former two-star recruit and Chip Cosby writes that the staff has very high hopes for linebacker Danny Trevathan.  The coaches truly believe they found a diamond in the rough when recruiting him out of Florida.

– Only in Kentucky could the football fan day and first week of practices be overshadowed by a dunk in another state by a guy who hasn’t even played a game in a UK uniform yet.  But, that’s exactly what happened today as footage of a pretty vicious dunk by incoming freshman John Wall over two-time NBA All-Star Jerry Stackhouse.  In case you missed it the first time around, here’s another angle.  Also, I’m fairly certain there is a Pooptooth sighting.

– Also, according to the Twitter accounts of Sir Rumbaugh and Brett Blevins of Hoops Report, CJ Leslie will be making an official visit to UK later this month, most likely the weekend of the 22nd.  It is Leslie’s only planned visit at the moment and an official one tucked in several unofficials to see his buddy seen dunking on Jerry Stackhouse above.