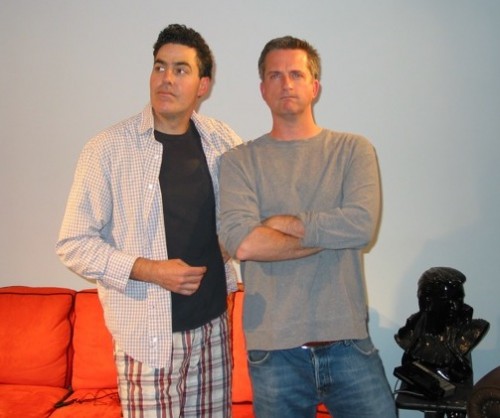 Simmons and one of my other favorite podcasters, Adam Carolla

I am a total mark for any person that mixes sports commentary with pop culture references. That said, it should be no surprise that two of my favorite people are Bill Simmons and Cluck Klosterman. I’ve got almost all of Klosterman’s books on my Kindle and I’m pretty sure I’ve never missed a single Bill Simmons column or podcast stretching back to his days on Digital City Boston (Which I remember being Boston.com, but whatever. I bow to you, Wikipedia).

Whenever these two get together for a podcast, it is always appointment listening. In a mammoth two parter that dropped yesterday, Billy and Chuckie get all up into college basketball. Starting around the 11:20 mark, they begin to dissect the racial/class implications of Duke hatred (And Coach K in particular. Don’t know if I agree with Bill’s assessment that the general public hates Krzyzewski), then how recruiting for Duke compares to Notre Dame football, then they branch out into Allen Iverson’s college career (Are you listening, Beisner? Your hero!) as well as Randy Moss.

John Wall’s name is dropped for the first time around the 20:13 mark. Around 24:40 they first mention Kentucky (in comparison to talent level to Duke) and they immediately discuss UK’s chances at a title. Klosterman touches on his theory as to why the Wildcats will go far but not win the NCAA tournament. If you aren’t big on confronting your sports-related fears, don’t listen. It is a pretty reasonable argument and based on the Big Blue’s inability to put teams away and concerns about their youth/inexperience.

The biggest gem in my opinion? Kosterman echoes a sentiment that I hear around the Bluegrass regarding the shooting prowess of the current college athlete:

“Boeheim has interesting philosophies, like, I’m just going to play zone all the time because college kids can’t shoot.”

You can’t walk into a old guy hang out (read: Local gas station with a breakfast area or a Big Boy/Jerry’s) and not hear old farmers lament the lack of prolific shooting in today’s college game. The argument typically ends the old-timer standing up to get his coffee refill and remarking that if Pistol Pete/Dan Issel were playing today, he would score 75 points a game. These men would like the cut of Klosterman’s jib which I find a hilarious notion.

So, give it a listen.