OK, so, during the dragging, sweaty, uncomfortable months of summer, we flippantly mentioned that we would be profiling every player on the team. It will only be fun and worthwhile, we decided, if we were both informative AND funny. Well, it would be really fun if we were drunk the entire time, but that’s neither here nor there. Thus, for these ten weeks leading up to the UL game, we will have at least one profile a day. We hope you enjoy these as much as we enjoyed the idea of doing them, but not the actual task. Oh, and we see the egregious “that’s what she said” in the headline.

We’d also like to use this italicized space to apologize to the families of the players whose last names end in ‘A’ or ‘B’ because these early ones might suck a little. 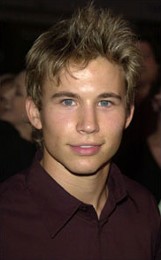 Seriously, how was I to keep from posting a picture of this dreamboat?

Unfair comparison to NFL-er: Ex-St. X great and long snapper Chip Mattingly. I think he may have been on a roster at some point…

Most interesting fact from his media guide bio: I once saw him return an interception for a touchdown. Not in the media guide, nor is it too interesting, but it happened.

Something we made up about him: Channels Coleman Barnes before each snap. His middle name is Taylor.

Items of legitimate interest: Described as a talented long snapping prospect with great velocity on his snaps. I’m sold!

Outlook for 2008, based on light research by our minions: Back-up to J.J. Helton on long snapping duties.