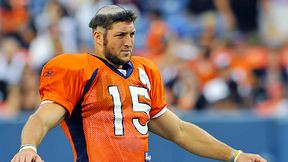 Fantastic Sam’s would have at least put in some product before he left.

Bit 1: I know Mr. Lentz already posted a picture of the new ‘do’ that Timmy T is sporting these days, but did you know that a former UK player was responsible? According to ESPN, the ‘monk-look’ that is sure to sweep the nation was the handy work of none other than Wesley Woodyard. The veteran Bronco and Rich Brooks impressionist (see video below) tuned up the clippers and exerted some revenge in the form of rookie hazing on the former Gator. Looks like UK players messing with Tebow’s head is becoming a pattern.

Bit 2: Over the weekend, Chris Lowe over at ESPN put up his breakdown of the Wildcats. He pretty much nails every storyline and talks about most of the key players, but it is a little light on Danny Trevathan for my tastes.

Football is coming. I can’t wait.