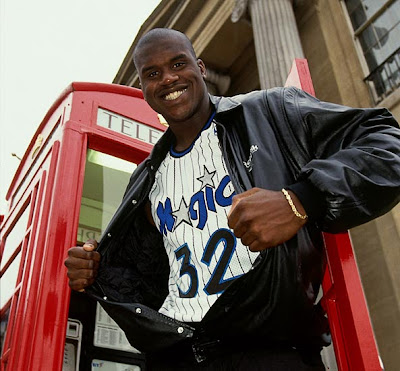 For the past week, basketball fans have done everything short of wearing “Team Jordan” or “Team LeBron” as they’ve battled among themselves to determine whether His Airness or King James is a better basketball player.  While ESPN continued to beat comparisons and arguments into the ground Wednesday, the man who shared the NBA superstar spotlight with both quietly rode into the sunset as Shaquille O’Neal announced his retirement through Twitter after 19 NBA seasons.  Over the course of his final four seasons, which were spent with three teams, Shaq faded a bit from the national spotlight (though he posted a quiet 18 and 8 for Phoenix in 2008-09), but there was no player not named Michael Jordan who loomed as large off the court as he did on it.  His stronghold of the center position in the early 2000s is still, arguably, the most dominant run I’ve seen from any player, though I’ll willingly admit he wasn’t exactly facing Kareem and Russell out there.  He made millions for guys like Matt Geiger and Erick Dampier and changed the way teams drafted while being accused of being out of shape and only focusing on the last three months of the season.  Through it all, he mastered acting in Blue Chips and Kazaam, saved Nezu, raised the awareness of Taco Neck exponentially and asked the world’s most important question:  “Kobe how’s my a** taste?”.   It’s safe to say that the world may never see anyone like Shaquille O’Neal again.  It’s been fun, big fella.  Best of luck in retirement.  You should be warned, though, if you want to dominate my rec league, you’re going to have to finally work on those free throws.

– The big news of the day came late Wednesday when it was announced that the SEC would do away with divisions in basketball beginning next season.  The decision came after the athletic directors approved the recommendation made by the coaches, under the leadership of John Calipari, to eliminate the East and West divisions.  Coach Cal said Tuesday that he was going to encourage his fellow coaches to be very involved in the process, but that his ultimate goal was to find a way to get more SEC teams into the NCAA Tournament.  By making this change, the SEC will now avoid situations like this past season where Alabama was so dominant in the West, but did not earn an automatic bid and teams like Vanderbilt do not get forced into a first round game.  For the upcoming seasons, the scheduling will remain the same, so it’s possible that we won’t see the full benefits of a completely open conference, but no matter how they decide to make the schedules in 2012-13, the league should be in better position to send an extra team or two into the NCAA Tournament.  Additionally, should they all home-and-home scheduling league-wide, the teams formerly in the West can benefit by guaranteed home games with Kentucky, Florida and Vanderbilt.  Those guaranteed games likely mean a boost in ticket sales, as well as a better shot at national attention.  Overall, it seems to be a huge positive step forward for the conference as a whole.

– One of the other big topics as the SEC meeting was the idea of paying players and both John Calipari and Joker Phillips opposed the notion.  Calipari emphatically stated his opposition to the idea, while the football coaches were presented with a plan by Steve Spurrier that would allow football players to earn $300 per game.  Spurrier’s proposal was signed by Nick Saban, Will Muschamp, Les Miles, Houston Nutt, Dan Mullen and Derek Dooley, but Joker chose to abstain.  His reasoning was not that he thought that it was a bad idea, just that he didn’t feel good about jumping on board with something that wasn’t set in stone.  However, all parties seemed to agree that the most important part of the proposal was simply the dialogue that it opened up and most seem optimistic that it will at least continue.

– The football coaches came together on a different issue, however, and voted unanimously to keep the number of football signings per class at 28.  Despite the coaches voting 12-0 against changing the rule, it’s still possible that changes could be in the future.  The SEC presidents and chancellors will vote Friday and have the ultimate decision regarding the rule.  The current rule allows for 28 players to sign and 25 to enroll, allowing the flexibility of using grayshirts.

– On a completely different note, the posturing for draft position continues to be strong in the Enes Kanter camp as his agent, Mike Naiditch, dropped a few bold quotes Wednesday.  Naiditch said that he expects Enes to go in the top two picks – top three at worst – and likened the Turkish big man to Dwight Howard and said he rebounds like Dennis Rodman.  Kanter remains in Chicago at the ATTACK facility with Tim Grover and will be visited by the Jazz (#3 pick) this week and the Raptors (#5 pick) Monday.  Despite the widespread assumption that Derrick Williams will go #2 overall, whispers remain that the Timberwolves are still intrigued Kanter.

– It’s been a fairly quiet summer so far for Terrence Jones, who most assumed would be going through the draft process right now.  He turned down an invitation to participate as a member of Team USA earlier in the week and Wednesday, his almost coach, Lorenzo Romar, offered up some refreshingly friendly words when asked about Jones working out and playing pickup games at the University of Washington.  This is what Romar had to say to Sportspress Northwest:

“I have no problem with it. I think any time you have good players coming to your gym, it’s a plus. A lot of people will want to say, well, he turned his back on you. No, he didn’t. He went where he thought was best, and I understand he made a decision publicly and all but, man, if I live my life based on people who did things differently than I thought, I’d be a pretty miserable guy. So, I kind of tend to move on.”

Well said, Coach.  Good thing too.  Anything questionable and Cal would have been forced to take something from you.  Again.

– Hey, remember DeAndre Daniels and all the times we kept saying he was going to make a decision on (insert date here)? He pushed his decision back again. I know Kentucky is not involved, but I know we all like smiling, so that’s enough reason to continue following this. Right?

– It was a basketball-free night, so there weren’t a lot of fantastic television options besides the Nasty Boys on Man vs. Food.  And that’s why you should kick yourself if you didn’t watch at least the final few minutes of the Stanley Cup Finals game between a blue team and a white team.  Vancouver skated off with a win after scoring the first goal of the game with 18.5 seconds remaining, making for a great story on the fourth or fifth page of your local sports section.  Ok, no more hockey.  I promise.

– After watching roughly 5 million playoff basketball games in the last month, I somehow forgot that Wednesday was also the premiere of Franklin and Bash on TNT.  Matt says it was good.  I’m going to watch the replay right now.  I’ll get back to you next week.  If you saw it, throw your opinion in below.

That’s it for now.  Make sure you stick around all day as we celebrate our first day together as a united SEC.  Matt will get the fun going with Kentucky Sports Radio at 10am on Talk Radio 1080.  From there, things should be fun, though I can’t promise I’ll be fully focused.  I’ll be in Miami violating my strict “Grown Men Shouldn’t Wear Jerseys” rule with pride.  Go Mavs.  In the meantime, remember that it’s gotta be T.W.I.S.M. for life…