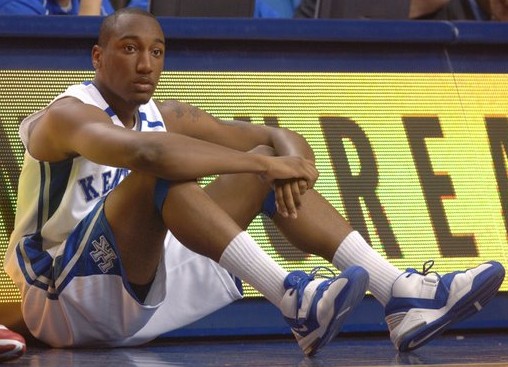 I am not sure what it was about Ramon Harris that made me such a fan. Unlike other KSR favorites, he didnt really read the site, wasnt particularly funny and there werent too many characteristics that stuck out about him. But for some reason, from the first day that the Alaskan Assassin stepped on campus, we have always been fans of the Razor. KSR gave him the nickname that he first liked, then didnt like and now likes again. We have watched him go through ups and downs, get hurt numerous times and be the focal point of the best sustained yell in Rupp Arena history (RAAAAAAMOOOOOONNNNNNNNNNNN!). All the while, he has given 100% effort, dove on the floor more than any player in history and changed numbers at a rate nearly unmatched.

For Harris, his UK career has been all over the map. He has played for three different coaches, seen the lowest of the lows with the end of the Billy Clyde era and won over a new coach to see minutes on the current 28-2 version of the UK Wildcats. But through it all, Ramon Harris has been True Blue throughout. He came from Alaska unknown and with only one picture to his name (the famous one of him in a UK shirt, pointing to the logo on the back). During his first season he rarely played, but then he started for the majority of the next two years. That time was tough on Harris, who along with Michael Porter, was often the target of fans’ frustrations about the state of the Clyde program. He came back this year, with less playing time, but a third straight coach who admired his worth ethic. If Tubby, Clyde and Calipari have one thing in common (and this may be the only thing), their praise for Ramon Harris might be it.

Offensively, Ramon has never been a UK-type player. He shoots threes worse than Drew Franklin after a night out in Blacksburg and until this season, had trouble finishing around the basket. But he may be the best perimeter defender UK has had during his time in Lexington. Even on this team with Wall, Liggins, Miller and others, when Calipari needs a key stop or has a particular player he wants to cool down, the Razor gets in the game. With his length and ability to communicate on defense, he usually guards the other team’s best perimeter scorer and does it well.

I am happy for Harris that he gets to finish his career on a very good team. His minutes have decreased, and so has the pressure on him when he is in the game. Fans now better appreciate what he can do and cheer his solid contributions to the team. I think we will continue to see him during the March run and my guess is that there will be at least one game where a key defensive series or quick UK run will be triggered by Harris’s play. We at KSR wish the Razor a great Senior Day and hope he continues that Alaska to Kentucky pipeline, which brought us not only a great nickname but a series of “I can see ____ from my house” Sarah Palin jokes that make the live blogs quite special.