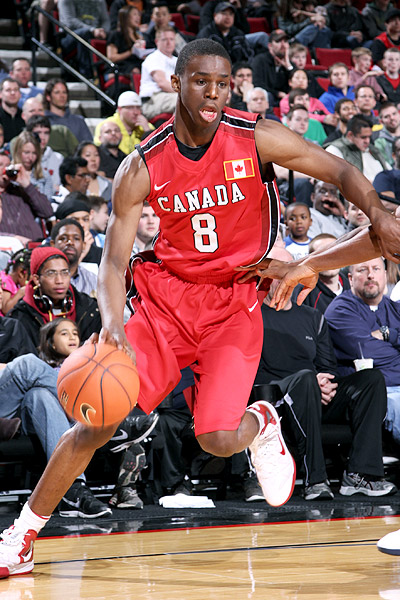 I generally go to AAU Tournaments not so much for the basketball, as for the spectacle. At the Nike Peach Jam, every major college basketball coach in the country is there, along with most of the major college basketball media types, creating a circus atmosphere that I find entertaining. The constant flow of basketball games is less enthralling, mainly because the games usually don’t matter. Hastily collected teams of stars are put together, coached by whatever individual has hustled their way into the position, and the ensuing battles are usually unbelievably sloppy and seldom exciting. It isn’t that the basketball is useless, it is actually quite helpful in comparing players and realizing whose talent is greater, it is just that who actually wins and loses these games is meaningless. So for me, the AAU Tournaments are less about basketball than they are fodder for future storytelling.

That was until Friday night. After six years of watching AAU basketball, I had become convinced that no individual game would ever truly hold my interest. And then I saw Andrew Wiggins play. I was not around when Lebron was tearing through the AAU circuit and I was absent for the “wow” moments that accompanied Garnett and Kobe. But for my money, Andrew Wiggins is the best high school player I have seen in my six years. Greg Oden was an absolute beast who you knew could dominate. Anthony Davis had the mix of athleticism and height that you knew was “can’t-miss.” And John Wall had an explosiveness off the dribble that consistently turned heads. But no one has popped off the floor to me in the way that Andrew Wiggins did this past weekend. In a game that included arguably the best player in the Class of 2013, Julius Randle, a stellar Duke commitment with a great name, Matt Jones, and another 2-3 players that will play high major Division I basketball, all eyes were on Andrew Wiggins. His ability to float down the court, explode towards the rim with seemingly no effort and control the game with that subtle swagger that the great ones have made every coach and journalist who wasn’t already on board, a believer for life. Jeff Goodman of CBS said, correctly I think, that if Wiggins had been in the last NBA Draft, he would have taken him #2 behind Anthony Davis. He is that good right now.

However in the build-up to the game, it wasn’t clear that Wiggins would be the story. Julius Randle, an absolute beast of a player, who has the ability to bull towards the basket with rare physical gifts, had been the storyline of the Peach Jam. One scouting service had recently named him the best player in America and conversations with those close to the UK program have me convinced that UK is a major player for his services. With Wiggins the best player in the Class of 2014 and Randle, the best player in the Class of 2013, on the floor at the same time, the game was really a battle for the title of America’s best high school player. While Jabari Parker had more notoriety, the moment the game tipped off, it became clear that, as one journalist put it, “Sports Illustrated put the wrong guy on its cover.”

From the opening tap, Wiggins’ athleticism was on display and captivated the largest crowd that I have seen at a Peach Jam game. He effortlessly glided down the court for multiple fast break lay-ups that left me a believer. The other players in the game stepped up their play accordingly and over the next 37 minutes, the two teams produced an 81-80 Overtime spectacle that was one of the more exciting games I have seen in person. The highlights that one can see here don’t do the game justice, but are still worth a look. Every major coach was in attendance and watching the faces of excitement on John Calipari, Bill Self, Jim Calhoun, etc as they viewed the game was almost as interesting as what took place on the court. Afterwards a prominent Division I coach said to anyone listening, “that is the first time I have ever seen an AAU game that I didn’t want to end.” Wiggins had 24 points in the SECOND HALF alone, leading his team to victory and proclaiming afterwards that he hoped it showcased that he was the best player in the land.

I have no idea what the future holds for Kentucky and its 2013 class. It is clear that the Wildcats are going to have a huge haul, but the question remains whether it will just be great or whether it is historic. A real possibility exists that Kentucky could get the Harrison Twins, James Young, Julius Randle and Andrew Wiggins for a class that would simply be unparalleled in the history of college basketball. All it takes is locking up guys who already want to play for Calipari (the Harrisons and James Young), convince one monster stud to join the party (Randle) and have another reclassify to 2013 (Wiggins). If that happens, the potential for an undefeated season would be obvious, as Kentucky could have 3 of the top 5 and 5 of the top 10 players in high school basketball. It boggles the mind and if it happens, the rest of college basketball will tremble.

But even if such an historic class doesn’t develop, Kentucky can still be looking for #9 if they can get their 4th Canadian of the last 15 years in Lexington. Andrew Wiggins is the best I have seen at this level and would immediately make Kentucky not only a contender, but a team destined to do something special. The Harrison Twins, James Young, Aaron Gordon and even Julius Randle would all be nice. But the player that is a game changer is a Canadian that will be playing two hours from Lexington this season in Huntington, West Virginia. If you want a 2013-2014 team that could compete with the group that just cut down the nets, hope for one goal…Andrew Wiggins taking his talents to Rupp Arena. He is the Future.

25 Comments for Seeing the Future