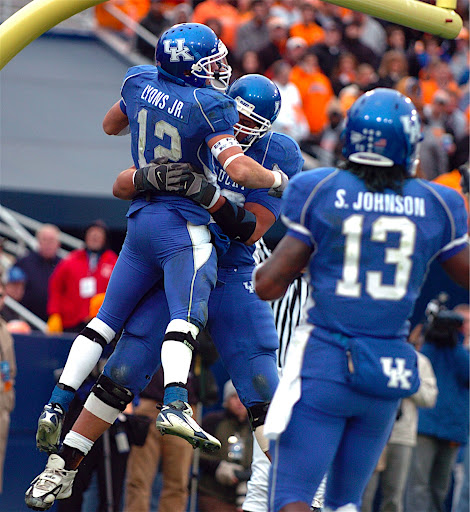 You may remember last week when I received a report on the first UK football scrimmage that was…..well, slightly negative. The talk of the poor scrimmage, particularly by the offense, has caused some to wonder out loud if all is lost before the showdown in the Ville. But fear not Cat fans, because it looks as if today’s scrimmage was much better. I spoke with the same person who saw the first one and then saw this one and he said, “it was like night and day.” A few notes….

— Quarterback play was much better. Hartline looked more comfortable and had much more time in the pocket to make decisions. But the real story wasnt Hartline, it was Randall Cobb. According to the spy, Cobb took 40% of the first team snaps and looked fairly solid. “He still isnt where Hartline is, but I think he will see the field this year.” Interesting stuff….

— The biggest improvement came from the offensive line. The reports of their bad play may have spurred them on as guys like Peters and Pryor were given a much more difficult time before they could penetrate the line. “This was the line I thought we would have.”

— Still not a great showing at WR. My spy said that the receivers were still dropping passes and running the wrong route, but there was some improvement. The coaches complained again afterwards about the performance, singling out Kyrus Lanxter (who must be big this year) as a guy who seems to be struggling and not giving full effort. The biggest worry this season will be at this position.

— In some good news, Aaron Boyd is returning to the field.

— One piece of bad news….field goal kicking was not good. Our source said, “I am not sure how many he missed, but it was more than one chip shot.” Bring on Bell County kickers!

Overall a big improvement and a shot of good news going into Louisville week. Negativity is now officially gone and the blog prepares for the Louisville battle. Tomorrow is my first ever live NFL fantasy football draft as I am in the Kentucky State Fantasy Football Championship, along with another 100 people or so at a hotel in Louisville. It should be a dork fest and I have no idea what I am doing in this having never participated before. But I, along with Johnny the Freak, Dave Ragone, the Big EZ and others will be in the leagues as sacrificial lambs. Wish me luck…..