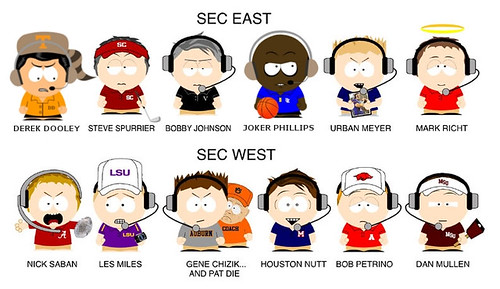 Overall, an awful weekend to be in the SEC East.  Unless you’re South Carolina and were the only team not playing, and by consequence, the only team not to lose last Saturday.  Every east team added a loss to their record, some just barely, but most fairly convincingly.  So hey, our game didn’t go as planned.  But at least we weren’t the only fans in misery.

Ugh.  Cam Newton is good, even when he doesn’t run it apparently.  It’s not like anyone suspected LA Monroe to hang with the tigers, but Auburn looked set on cruise control pretty much the whole game and still demolished.  It’s going to be a tall order to contain Newton this weekend, but who knows, maybe Chizik will get confused when he sees our Newton on the bench, and leave his at home.

Vanderbilt continued to be the pride of the SEC, by getting thumped by a mediocre Big East team.   The ‘dores are now 1-3 on the season, with their lone win coming against Ole Miss. Sigh.

Miss State continues to look dangerous, racking up 566 total offensive yards (plus 153 in returns,) and converting on 7-11 third downs.  Of course, this was all against a pitiful Alcorn State team, so don’t think too much of the bull dogs just yet.  These kinds of games don’t tell us much about our future opponent, but they have been pretty consistent this year, so look out.

Nothing much of importance happened during this game.

Some Kentucky fans were able to take solace in this game result.  If we were hurting, we knew the Vols were hurting worse.  Tennessee had the lead when the game was over – the first time.  But then the refs called a ‘too many men on the field’ penalty (and rightly so, Tennessee had 13 guys out there,) and let LSU replay the final down.  LSU bangs a touchdown in, wins the game, and Tigers fans decide they hate Les Miles regardless.

Georgia finally gets AJ Green back, and he delivers, finding the endzone twice, receiving for 120 yards, rushing for 40, and selling his game jersey for 400.  And of course, he made this ridiculous catch.  Still, Georgia lost and dropped to 1-4 on the season, with their only win coming against Louisianna Lafayette.  Who would think, just a few days after losing to Ole Miss, we’re still looking at the Georgia game as a fairly possible win?

You’re welcome Bama, we loosened ’em up for you.