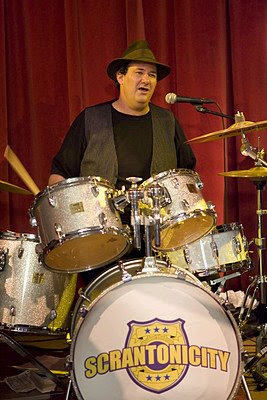 Some notes to get you on your merry way:

— There will be another media opportunity later today, but in the SEC teleconference this morning, Calipari mentioned that Daniel Orton was upset about playing time, and that Calipari totally understood where he was coming from. In fact, Calipari said that if Orton werent upset, Calipari would be upset. Still he said that Orton was a great teammate and was a joy to coach. Will someone from the national media roll with this and try to make it a story? Only if Jimmy Dykes tweets about it…

— Demarcus Cousins is Freshman of the Week….again, rinse and repeat. The talk is starting to heat up (well at least it did Saturday at the Dragon) that we could see Wall win National Player of the Year and Cousins SEC Player of the year. As that one song from the 90s once said (which we rocked at Transylvania), “How Bizarre.”

— If anyone celebrated harder than Jacob Tamme did after his special teams tackle last night, I am not sure who it would be. Randall Cobb clowned him a bit on Twitter, but it was cool to see Tamme get some publicity. Larry Vaught is a huge Tamme fan and to Vaught, he and Eddie Montgomery are the Peyton and Kenny Chesney of this generation.

— If you arent going to College Gameday, I wish you were. Gameday is going to be quite the scene. ESPN announced again that Bobby Knight wont be there, but it isnt a huge shock. Now lets see if they bring Forde.

— Speaking of the artist formerly known as a journalist, Forde gives his picks for Coach of the Year so far and ranks them 1-4….and shockingly Calipari doesnt make the list. I can totally understand Boeheim’s name there and potentially the Kansas State coach as well. But you dont have Calipari over Bo Ryan or the BYU coach (who just got blown out by UNLV)? Seriously Pat? Oh and by the way, people tell me he wasnt awful as the UL-Rutgers color analyst…but I wouldnt know.

— Most want to talk about the game at the Super Bowl, but I talk about the more important things…like commercials and the Who. The Who are bizarrely old but I actually kind of dug their performance. While they cant sing or play like they once did, the combination of “Baba O’Reilly” (one of the ten best songs of all time) and the absurdity of Pete Townsend in a belly shirt was good enough for me. As for commercials, I will go with the Dave Letterman promo…brilliant touch with Dave, Oprah and Leno (the latter having his only redeemable moment in a year). And I dont have any clue why people were upset about the Tebow ad. It was lame in execution, but I give props to the kid for standing up for his beliefs in a subtle, classy way. If only others in sports believed in ANYTHING besides making themselves money with as much conviction.

— Finally, the highlight of the podcast for me was our introduction to “DJ Marky Mag on the Ones and Twos” thanks to a blog reader. I am not sure how I didnt know about the hottest wedding band since Scrantonicity, but now we all know that One Shot Entertainment is the place to go for our wedding DJ needs. As their website says, “One Shot’s owner and founder, Marc, has nearly two decades in the entertainment energy” and with that type of experience in the entertainment energy, anything is possible. It is good to know that we have a true renaissance man following Kentucky sports from all angles and if you need scouting services, Mexican comedy or hype spinning of fat tracks at your next bridal bash.

Here is the podcast if you havent heard it yet. And if you have, play it backwards to reveal the secret behind Alan Cutler’s moustache: