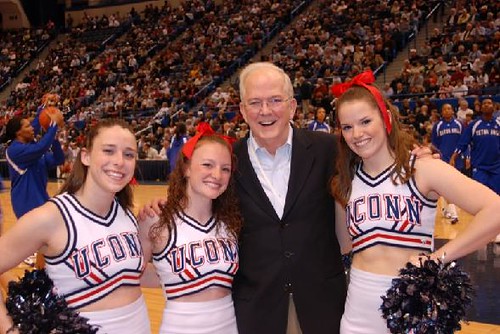 Ladies and gentlemen, welcome to Madison Square Garden.  Or, at least, welcome to this post that is going to talk about two teams playing in Madison Square Garden.  The Cats take the national stage again tonight looking to not only further solidify their standing as a team to beat in the 2009 basketball season, but also inflict a little pain on a Calipari nemesis.  Maybe even strengthen some northeast recruiting footing.  For the Cats, they come off an emotional win against North Carolina.  The first half was mostly fueled by emotion, allowing them to take a lead of as much as 19 at one point.  They would ultimately win by only two as John Wall spent some time sitting and the emotion died down.  Cal and some negative nancies will focus on the point difference in the second half.  I’ll point to that being the first time in about 8 years I’ve watched an opponent tear off a run and still knew we were going to win.  Savor that feeling.

On the other side, UConn enters the game with an impressive record of 6-1 and a national ranking of #12.  Serious questions remain, however, as to whether or not this is a team that could actually be considered one of the elite.  It is an unexperienced team that goes only six deep and the talent is so thin up front and heavy in the back, it stirs up fond memories of a pre-babies Jennifer Lopez.  If you consider LSU a test, then they’ve passed one this year.  However, they failed pretty terribly in a not-so-close loss to Duke that saw the Devils play a more physical game.  And, despite having such a talented backcourt, they’ve had trouble containing opposing guards this year.

I honestly don’t see them staying within double digits of the Cats.  No homer.

Here are the starters…

Given that his name is “Walker”, it should be no surprise that UConn’s point guard is one of the fastest players in college basketball.  The former McDonald’s All-American experienced a bit of an up-and-down freshman campaign as he backed up laptop connoisseur A.J. Price, highlighted by a 23-point breakout in the Elite Eight.  This season, he’s been more steady and showed a drastically improved outside shot.  The New York native has vowed to take it at John Wall in front of his hometown crowd, which could be the dumbest thing not uttered in Picks to Click.  Walker attended storied Rice High School in New York, which gave us two of the biggest prep superstars of all-time in Felipe Lopez and Shagari Alleyne.  Against LSU and Duke (the only two major opponents), he went for 13 assists and 9 turnovers.

There is no doubt that Jerome Dyson is a good basketball player.  You don’t average double digits all four years of college as a four-year starter at a school like Connecticut without being a good player.  But, the dude loooooves to shoot the ball.  Over the past three seasons, his field goals percentage has decreased, reaching 38% this year and his three point percentage has plummeted from 35% last yer to 26% this year.  And it’s mostly because of shot selection.  His 2009-10 resume includes these gems from the field:  3-15, 4-11, 6-20, 8-23.  Even Ramel Bradley is laughing at that (sorry, Ramel).  He also seems to fall very awkwardly and painfully a la Ramon Harris nearly every game meaning he could literally have his ankles broken by a John Wall crossover tonight.

Stanley, Stanley, Stanley.  You called out DeMarcus Cousins for being overly cocky (although they say you’re friends from back in Birmingham) earlier this week.  Probably not a smart move.  But, as the most important piece of the Huskie puzzle, I guess you can do what you want.  Stanley logs nearly 35 minutes a game and is the rare combination of athletic freak and amazingly consistent basketball player.  He’s logged double-digit points in every contest this year to go with his always-steady board work and, though he has seemed to be reluctant to pull the trigger lately, can knock down the three.  Stanley also looks like he’d come up to you on the street and tug on your shirt and say “I’ve got these cheeseburgers, man”.

Gavin Edwards parents would tell you that he averaged 3 and 3 as a junior last year because Jeff Adrien and Hasheem Thabeet took most of the minutes.  Everyone else would tell you that he just isn’t very good.  Those people would include his high school basketball coach too.  Edwards did not see hardly any time on the floor as a high school player until his senior year and became a Dan Werner-esque “oh no there is no one left, so this guy is now a stud” recruit that UConn just had to have after Josh Boone bolted for the NBA in June 2006.  He was a three-star recruit and the least noteworthy in an eight man – yes I said eight – recruiting class.  He has done nothing since to dispel that notion besides log 11 of his 23 blocks against Harvard and Hofstra.  He probably spent most of the day in a suit and tie dropping off resumes all over the Big Apple.  That could affect his legs.

The gem of Connecticut’s 2009 class is off to a fairly decent start…on the boards at least.  He’s pulled down double digit rebounds three times this season, highlighted by 14 against both Hofstra and Duke.  Offensively, the #21 player in last year’s class hasn’t done quite as well.  He’s shooting a poor (for a big man) 45% from the field and shoots an even worse 40% from the free throw stripe.  He’s also prone to foul trouble.  Also, his first name is androgynous.

– Jamal Coombs-McDaniel:  This 6’7″ freshman was high school teammates with Oriakhi and was a four-star.  Only UConn bench player getting over 10 minutes per game plays inside-outside.

– Everyone else:  Doesn’t matter.

Notes: Kentucky now holds 1,996 all-time wins….Calipari is 1-2 against Jim Calhoun’s teams….UK is 0-1 all-time against UConn, losing in 2006 NCAA Second Round (in overtime)….This is UK’s first appearance in Madison Square Garden since losing to both Mike Jarvis and Jason Kapono….Cats are 163-70 against the Big East historically….John Wall is second in the nation in assissts with 7.7….Patrick Patterson’s 68.8% from the field is fourth in the nation….This tournament is sponsored by DirectTV, have you heard?….I lied when I promised a better preview after my crappy UNC one…deal with it….I’m just one person, I can only do so much….