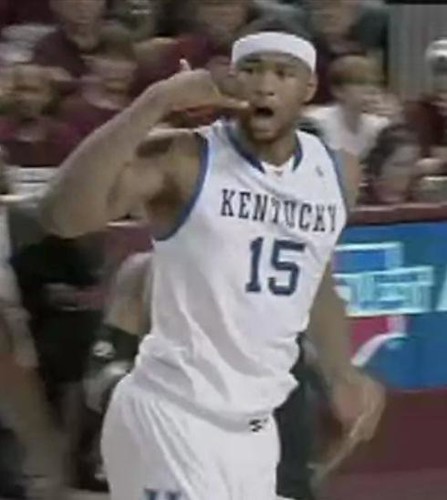 If liking this is wrong, I don’t wanna be right.

Well, it has been a fun day. I hope you got outside and soaked up your daily allotment of Vitamin D. Let’s blow out the final candle on this cake with a few of the stories out there on the web:

-The UK Softball team had a sweet and sour Saturday in the NCAA tournament. It started off sweet with the conclusion of a rain delayed game against Ohio State from Friday night. UK sprinted out to a 6-0 lead until OSU stormed back with a 4 run 7th inning to put a scare into the Wildcats. Big Blue held on and won 6-5, but the joy was short lived. Kentucky then had to play California a couple of hours later and fell 1-0 despite putting seven runners on base and out hitting Cali 4-2. Since it was a double elimination tournament, the Wildcats had to face OSU again later in the evening and concluded their season with a 5-3 loss. Both games were tough losses and I’m sure the ladies were beat after having to play 3 games in one day. Congrats to the ladies on a great season.

–UK Baseball beat the University of Georgia today, but it was too little too late. After being blown out by UGA during the first two games of the series, UK lost their chance at post-season conference tournament play. The Cats are now squarely on the bubble for the NCAA tournament. They have notched significant wins against ranked opponents but their record is a bit subpar. Big Blue now needs some big luck when the NCAA chooses its tournament field on May 31.

-Dick ‘Hoops’ Weiss of the NY Daily News examines the state of college basketball and one-and-done players. Guess who is the example topic? Your University of Kentucky Wildcats. DW treats the Cats fairly and concludes that Calipari is simply operating in a way that maximizes UK’s opportunities under the rules. He does a great job emphasizing that the rules are crazy and Coach isn’t to blame. It is a good read and the article has the first semi-attractive picture I have seen of Khloe Kardashian.

-In what is becoming a tiresome theme, the Detroit Free Press reports on DeMarcus Cousins and his attempt to rehabilitate his ‘bad boy’ reputation. Look, this is just getting silly. DeMarcus is one of the most talented, engaging players I have seen in college basketball. Ever. What is it this perception based on, anyway? He didn’t rob a bank. He didn’t get arrested. He didn’t even get a speeding ticket. All he did was wear his emotions on his sleeve occasionally (what basketball player doesn’t?) and play out of his mind in one of the biggest pressure cookers in college basketball. When many a player would have moped and reacted negatively to their cell phone getting into the hands of opposing fans, Cousins had fun with it (as shown in the banner pic). I hate to go conspiracy theory on you all here, but I am thinking the #4-#10 teams are supporting the ‘attitude’ rumors so that Big Cuz can fall to them in the draft. Don’t think these NBA guys are above playing such Jedi mind tricks on each other. It is the only logical explanation I can come up with.

Everyone have a good weekend!