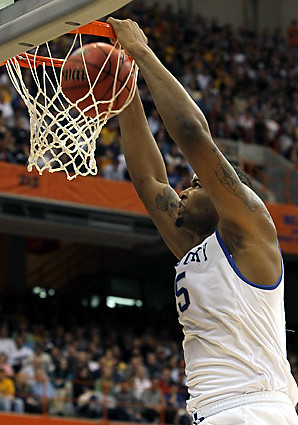 As Michael Scott would say, “Gooooood Morning Vietnam!”. Let’s get to some links, shall we?

-The New York Post profiles DeMarcus Cousins and gauges the interest of the Nets taking him at #3. Great quote by Cuz, “If I were a GM, I’d take me”.

-Frank Hughes of SI.com calls DeMarcus ultra-talented but still questions his attitude. Great quote #2 from Cuz, “”Which one would you take: a nasty big man or a friendly one?”

–Poultry Production News reports that John Calipari had a successful session motivating Alltech employees (sponsor of the World Equestrian Games and makers of a fine brew).

-Ramon Harris look-a-like Christopher Cason recaps Day 2 of the predraft media session with some great coverage of the Wildcats.

–Brett Dawson of the C-J reports on Eric Bledsoe and how Kentucky prepared him for the next level. He also talks about Patterson working out for the teams to prove a point.

Looks like a good place to stop. I’ll be around all day to keep you up to date with any breaking news, including the rain delayed result of the NCAA tournament softball game between UK and Ohio State (where UK leads 3-0 after 3).