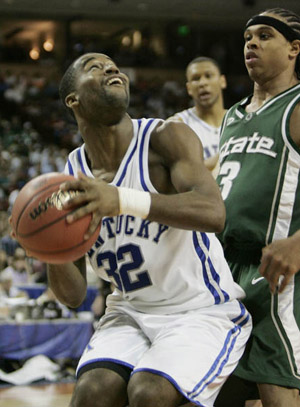 – Joe Crawford to the Lakers has Billy Gillispie and Mitch Kupchak saying good things.  But ESPN, not so much.

– Good stuff from the journalistic force known as Jody Demling including yet another UK football commit and a possible confirmation of some DeAndre Liggins good news.

– Great news for those of you who get the Victoria’s Secret catalog.  You can now have a believable excuse as to why you have it because Victoria’s Secret is now selling UK gear.  You’re still on your own to come up with a reason why it’s between the mattress and the box spring.

– In case you missed the NBA Draft, Vandy’s Shan Foster can’t wait to play in the NBA.  And, Bilas thinks he looks like Usher.

– Rajon Rondo, you just won an NBA championship, what are you going to do?  “Umm…not be someone’s practice dummy.”  Rajon Rondo politely declined an opportunity to scrimmage with the Olympic team.

– And since I know you all were crushed yesterday when an emergency pulled me away from the site and left you without your KSR Weekly World Report, here is the video that I had planned to include.  It makes me smile.  Get Blazed.