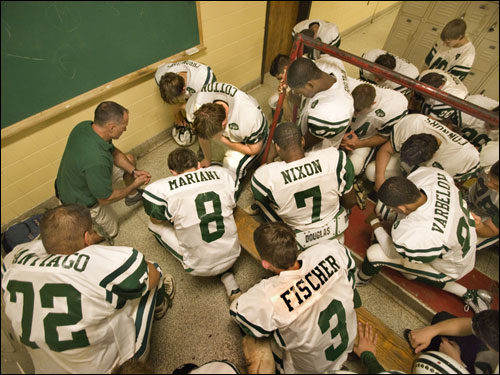 Since the beginning of time – no matter how you believe that beginning came about – sports and religion have been married together in a considerably less controversial marriage than religion and politics.  Here in Kentucky, the three have been thrust together in the same room and let’s just say things are getting a little awkward.

If you haven’t been brought up to date on the whole Bell County football prayer thing, you can read it here.  Essentially, what’s being reported is that Department of Education told Bell County High School that holding a prayer over the public address system was unconstitutional and needed to stop.  Of course, that then sparked the political campaign nerd fight between a challenger and an incumbent, but we don’t care about that.  This is a sports site!

However, that doesn’t mean we can’t get into a little high-level intelligent discussion of our own here.  Do you have an issue with organized prayer at sporting events?  The Bell County prayer is probably a little less typical of what you find at most schools, but I never had a coach that didn’t bring us together in the locker room for prayer before a game.  If you didn’t want to participate, you didn’t.  No harm.  It’s a tradition that even makes it’s way up to the professional levels.  But is it wrong?  Debate below.