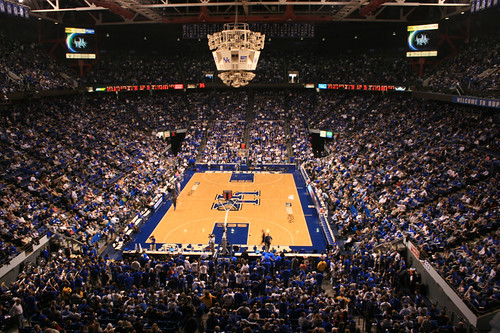 The Big Blue Nation has done it again. Through undying determination to win every internet poll ever created, Kentucky fans have dominated yet another one, as Rupp Arena crushed the field to be crowned the top venue in college basketball. The home of the Wildcats tallied 174 first-place votes, more than quintupling Allen Fieldhouse’s 32 to take home top honors. Rupp may not have been the toughest place to get a win over the last couple of years (unless you’re Billy Gillispie) but with the fanbase’s passion at a fever pitch and the excitement around the program almost boiling over, that’s due to change. I have a feeling that after North Carolina and Louisville visit Rupp this season, they’ll have no problem with the way the voting turned out. The return of the magic to Rupp Arena…just another example of how Coach Calipari is bringing us back to the top. Is it basketball season yet?