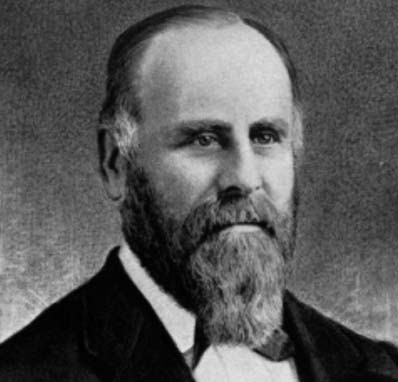 Today’s birthday honoree has a name you are likely familiar with, and a story that is somewhat inspiring. Besides having a middle name that doubles as the word my grandmother used to use to refer to Tanya Tucker, Rowland Hussey Macy was the individual who started the chain of Macy’s Department Stores. His store became the largest department store chain in the world and of course is the sponsor of the famous Thanksgiving Day Parade that Mr. Pitt wanted to be in, holding up a balloon. But what most people dont know is that Macy was initially a failure. He put up four versions of the Macy’s store, in cities around Massachusetts and New York, and all four failed, due to a combination of bad locations and poor management. Then he gave it one last chance on 14th Avenue in Manhattan, and it took off, creating the dynasty of store chains that now exist everywhere, including in malls in Kentucky. Old Hussey probably never thought much about the internet, but his story is sort of an inspiration to those of us at KSR. We have been radio vagabonds for a number of years and really never found the right combination of location, time and station to make a real dent. Now we think we have that and Hubby is already planning our future sponsorship of the Paintsville, Kentucky Christmas Parade.

— Of course the story of the weekend was the commitment of Kyle Wiltjer to the Cats on Saturday night. The decision popped somewhat out of nowhere to most recruiting analysts, but in hindsight it made sense. UK made another offer earlier in the week to local Forward Chane Behanan and chances are that if he accepted, the door would have closed for Kyle and UK. If he determined that he really wanted to be a Wildcat, making the decision immediately made sense. His dad said he came to Kentucky because he wanted to play somewhere with players that were able to develop and compete for a title. Those two explanation showcase just how important last year’s team will be to the future of the program, as it helped add yet another player for the 2011 class and cement its likely place as the best class in college basketball history.

— Drew Franklin and I were at the Rich Brooks dinner and there was some elation for John Calipari as he found out the news. He left the dinner to go watch the decision in a building next door and came back pumping his fists and smiling. It was actually great to see the Coach celebrate a good recruiting piece of news and it showcases that when it comes to being happy about good news for the program, Calipari can be as giddy as any Big Blue Nation member.

— The Wiltjer decision also showcased once again how recruiting has become a different animal under Calipari. Whereas it used to be the case that following recruiting required figuring out UK’s many targets, following them all year and paying attention (and money) to various recruiting sites, now really all anyone needs to do is just sit back and wait. You KNOW Kentucky is going to end up with 3-4 studs every single year and chances are, if Kentucky wants them, they will get them. And when it happens, many times (as Saturday night), no one saw it coming. Recruiting “gurus” generally need a program that wins some, loses some and competes all year in order to sell subscriptions and keep up interest. With Calipari, recruiting is better than ever, but the fervor in following it is strangely less than in years past. We know in the end studs will be at Kentucky and as one guy told me last night, “just wake me and tell me which 5 stars are ours.”

— With the Wiltjer decision, Quincy Miller will almost certainly not be a Cat (although that has been extremely unlikely anyway for months) and Chane Behanan’s situation becomes much more shaky. UK now has three forwards in the class and it seems questionable to take another. The last member of the class (if they take another) would likely be a guard to fill out the rotation. Louisville fans might want to send Calipari a thank you note…by taking Davis and Wiltjer, they might get their best recruit (Miller) of the Pitino era. Big Brother helps throw little brother some (VERY) talented crumbs…how sweet.

— I sense people shifting on Entourage and suggesting that it is back to being very good again. I dont buy it. Scott Caan is now the best actor on the show and as Bill Simmons has suggested the celebrity cameos are just too much. Still love Ari, Drama, Ari’s hot wife and Lloyd…still cant stand E or Turtle. I will watch it out of habit, but it is still not great…but I am all-in for “Eastbound and Down” Season 2.

— We are now six days from UK-UL and the debut of Operation Win. All the talk Saturday night at the Brooks dinner was about the game and there does seem to be a growing confidence around the fanbase that UK will get it done at Papa Johns. The scrimmage on Saturday was pathetic according to Joker but some of that may just be motivation and a desire for UK players to keep their eyes on the prize. Jeff Drummond of Kentucky Ink told me that he thinks UK will run on Louisville with ease. That is my prediction now as well (Drummond is…along with Gidel, Duncan Cavanah and Oscar Combs) and I am ready to load up on the Cats…keep that spread at three boys and girls.

— Big shout out to our man Josh Teater, who came in the Top 30 at the Barclays today and is now moving to the next event in the Fed Ex Cup. Teater is a big KSR fan and a huge UK guy, who wears the Cats gear all over the land. We will be pulling for him at event 2 coming up this weekend.

— Also remember that Tom Leach’s radio show debuts this morning on 1080 AM at 9 am, leading into ours at 10 am. Three straight hours of UK talk in Louisville…check it out. And to answer the questions, we hope to have streaming within a month…for now our show will have podcasts every day in the afternoon. This week we have Evan Daniels, Jeff Goodman, Dick Hoops Weiss and Kyle Wiltjer all scheduled to join us.

— The newest podcast is up one post below. It is a good episode with the regular crew and a lot of funny stuff as we get ready for football season. If you havent heard it yet, please give it a listen.

Big day ahead….Louisville HATE DAY is THURSDAY, with posts from everyone on the site making fun of the Cards and some special guests. Do not miss what is usually one of the best days of the year. More later….