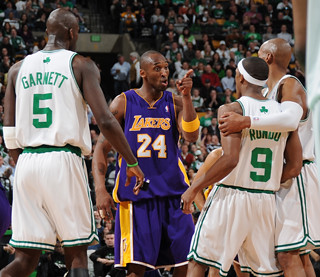 John Salley recently called him the best and smartest point guard in the game. The Spider might be right as Rajon Rondo is absolutely tearing it up for the Celtics and is being pointed to by many as the reason they might win the 2010 NBA Championship. If you missed the game last night, Rajon caught a spectacular outlet pass from Paul Pierce late in the game (schooling Ron Artest in the process) and scored an acrobatic layup to effectively seal the game for Boston.

Today, boston.com profiles Rondo and his growth as a player. It is a good read and almost scary that Doc Rivers doesn’t think Rajon has reached his full potential yet. The link also contains video of Rondo’s post game presser and full text of the event can be found here. It is a fairly rare thing to see a UK player develop into an NBA superstar. Do yourself a favor and watch the last two games (The NBA and the refs will absolutely assure a game 7. Write it down) and the spectacular development of the former Wildcat.