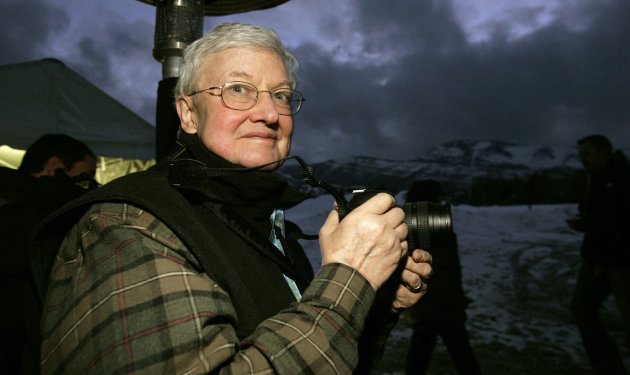 The world said goodbye to its top film critic on Thursday when Roger Ebert passed away after 70 years of movie watching. The last thumb in the Siskel & Ebert team had been in a long battle with cancer for over a decade and it was revealed earlier this week that the cancer had returned. His wife said in a statement that they were on their way home for hospice care when he “looked at us, smiled, and passed away.”

Though Ebert will always be remembered for his honest and witty movie reviews, it’s important to not overlook what an inspiration he was after cancer made its way into his life. He never surrendered to the illness and continued to work, churning out reviews for all of us to enjoy, when most would’ve called it quits. While undergoing operations for cancer of the thyroid, salivary glands and chin, Roger Ebert’s spirit, passion and work ethic never wavered. When cancer took his ability to eat, drink and speak, Ebert continued to write about the movies, just as he had done for over 40 years.

In 2012, when he relied on tubes for his daily meals, Ebert watched over 500 movies and wrote reviews for half of them. “When I am writing, my problems become invisible, and I am the same person I always was,” he told Esquire magazine a few years ago. “All is well. I am as I should be.”

We’ll see you at the movies, Roger.

The Final Four is a mere 40 hours away and there’s only one thing on the minds of Kentucky fans as college basketball’s biggest stage approaches. His name is Andrew Wiggins. Wiggins, the top-ranked high school player in the country and one of only two uncommitted prospects in the Top 100, is getting close to picking a destination and Kentucky is still strongly in the mix with Kansas, North Carolina and Florida State. Though some reports suggest he already knows which school he’ll attend, we still believe it’s anyone’s game in his recruitment. This is how it stands as of Thursday, April 4, 2013:

— Ask a Kansas fan and they’ll tell you Andrew Wiggins is going to Lawrence to play for Bill Self. KU message board rumors have been rampant this week with talk of Wiggins becoming a Jayhawk, in part because Nick Wiggins tweeted that his younger brother will “shock the world” when most expect it to be Kentucky or FSU. To top it off, Kansas commit Wayne Selden said he feels good about Wiggins joining him after talking briefly in Chicago during the McDonald’s All-American festivities. Those are two things we don’t want to hear right now.

— Ask a Kentucky fan and they’ll tell you Andrew Wiggins is going to Lexington to win a title with John Calipari. Being the headliner of the best class college basketball has every seen will work wonders for Wiggins’ marketability on down the road, as will winning an NCAA championship and potentially going undefeated. It’s the perfect situation for a future superstar like Andrew Wiggins.

— Ask a Florida State fan and they’ll ask you what a basketball team is.

For all of you out there hanging on to every word Andrew Wiggins says, which includes me, USA Today’s Jason Jordan spoke to Andrew Wiggins and Wiggins told him his primary goals in college are to win a championship and get ready for the NBA. “I just wanna win at all costs,” he told Jordan. “I wanna win a lot next year.”

Wiggins spoke highly of all four programs in the interview, as expected, but emphasized the potential for complete domination at Kentucky next season. He said, “Coach (John) Calipari said we’d win games by a lot if I came to Kentucky because no one could play help defense. I love that because I love to dominate. Who doesn’t like to win by a lot? But I have to be prepared for the league. I’m really focused on that. Just gotta figure out where that preparation will happen.”

You can read Jordan’s entire article on Wiggins here.

As most of you already know, all hope is out the window for an Archie Goodwin return to Kentucky next fall. The young man from Sylvan Hills, Arkansas has yet to sing with an agent, but he will sign autographs for fifteen bucks a pop at Lexington Sports Cards in Lexington this Saturday from 6:00-7:00 p.m. Archie confirmed the autograph session with Dick Gabriel Thursday night on Gabriel’s radio show. Even if he were to back out of the appearance, Lexington Sports Cards is already selling tickets to the event online, meaning Archie’s amateur status is officially extinct.

Now that Goodwin has cemented his decision to enter the NBA draft, it’s time to play the guessing game of where he’ll land. If you trust the experts, you’ll have a headache because they all seem to have conflicting opinions of the former Kentucky guard. For instance, Jonathan Givony at DraftExpress.com currently ranks Goodwin as the 17th best prospect entering the draft and the fourth-best shooting guard behind Ben McLemore, Victor Oladipo, and C.J. McCollum. But another mock draft website, NBADraft.net, projects Archie going 34th overall to the Phoenix Suns in the second round with California’s Allen Crabbe and Michigan’s Glen Robinson Jr. leaving the board before him. There’s still a lot of evaluating to be done before the big day comes, but for now it appears Archie Goodwin could go anywhere.

Considering Coach Cal wanted him to return to school for his sophomore season, one would assume the scouts aren’t high on Goodwin right now. Cal had discussions with NBA personnel before meeting with Archie last week, so if his recommendation was to return, it’s probably the case he didn’t receive a lot of positive feedback, if any. Either way, as much as we’d love to have him back, we’re happy for Archie making the jump and we look forward to covering him over the next few months as he goes the process of increasing his stock and preparing for the draft.

If you missed Wednesday night’s McDonald’s All-American game, this highlight reel from the game will get you up to speed on all the action. Watch as Andrew Wiggins and Aaron Gordon put on a show with some of their closest high school basketball friends from around the country:

Not to knock his MVP performance, but Aaron Gordon did a lot of floating around halfcourt to score a lot of his points. Defense isn’t expected in all-star games, but fans would at least like to see everyone get back and in something close to position. Wiggins, on the other hand, played defense like all of Canada was relying on him to shut down his man.

A’dia Mathies was a participant in the College Basketball Skills challenge in Atlanta Thursday evening. The Kentucky guard, one of the most important players in the history of UK women’s basketball, competed in the women’s three-point competition on ESPN. She shot across from Delaware’s Lauren Carra, who Kentucky defeated in the Sweet 16 in Bridgeport. Mathies hit 12 of her three-point attempts in the opening round, two shy of matching Carra’s 14, but failed to advance to the semifinals. She has no idea how much she’ll be missed by UK Hoops fans in the future. What a great career in Lexington for the Kentucky native.

Also from Thursday’s ESPN programming, Dakari Johnson tallied 17 points, 13 rebounds and seven blocks in the NHSI quarterfinals on ESPNU Thursday afternoon. Johnson’s Monteverde Academy took down Oak Hill, 77-71, in overtime to advance to Friday’s semifinal against Emmanuel Mudiay and Prime Prep. The game will be televised on ESPN2 at 2:30 p.m.  Tune in to catch Dakari in his third straight game on national television versus Mudiay, who Calipari is drooling over for this 2014 recruiting class. It’ll be a goodin’.

Kentucky football will practice Friday morning and then again on Saturday as the spring game approaches. Coach Stoops tweeted that guys have been competing with more urgency this week, which is something Kentucky football fans haven’t heard in a long, long time. The talent on the field still has a long way to go, but there’s a lot to be said about the new attitude and intensity in spring practices under the new staff. I can’t wait to see how it translates onto the field in the fall.

KSR will be coming to you live Friday morning from College Day at Keeneland on opening day. Matt and Ryan will take in the sights and sounds of the peaceful morning at the track before all hell breaks loose to kick off the spring meet. We may not have spring basketball in Kentucky this year, but Keeneland is back to ease the pain.