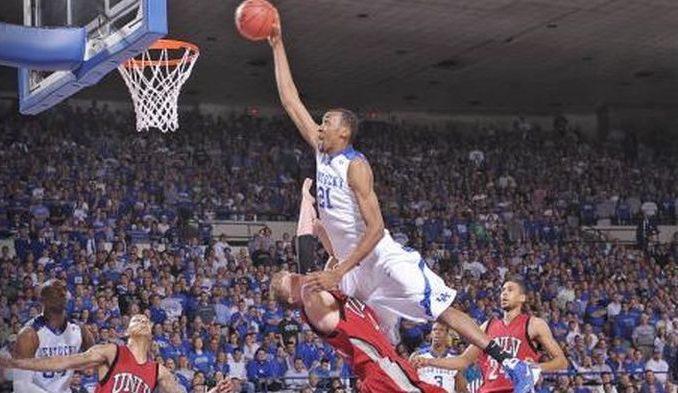 Hopefully, the NIT will produce some moments like this, if anything

Well, now that UK isn’t vying for a National Title anymore, the next best thing is a road game on Tuesday night at THE Robert Morris University right? Right. The Wildcats will face the Northeast Conference regular season champions Tuesday night, heading to Pennsylvania to take on the Robert Morris Colonials. Since Rupp Arena will be occupied for the NCAA Tournament, the Wildcats will be making the trek up to John Calipari’s motherland of Moon Township, Pennsylvania in the first round of the NIT. Here is everything you will ever need to know about Robert Morris until Wednesday, at which point its completely okay to forget all of it.

THE Robert Morris was born in England in 1734, but eventually became one of America’s first heroes as his signature graced some of the most important documents in America’s history such as the Articles of Confederation, the Declaration of Independence, and the U.S. Constitution. He eventually became a Senator for the state of Pennsylvania, and was the Superintendent of Finance for the blossoming country, but after an economic downturn in the late 1700’s he went bankrupt and spent a few years in debtor’s prison before dying in 1806. Little known fact, but based on the picture above, he also pioneered the “flowing cul de sac” hairstyle.

The artist formerly known as the Pittsburgh School of Accountancy opened its doors in 1921 in the suburb of Moon Township, Pennsylvania, also known as the hometown of one John Vincent Calipari. How convenient. I know you don’t really care about Robert Morris, but this little nugget of information can’t be passed on. In 2011, RMU bought the nearby Holiday Inn due to a need for student housing and is now operating as both student living, and a hotel as they transition into a student-only facility. “Did you study for your Calc exam today?” “Nope, but I do stay at a Holiday Inn Express EVERY NIGHT.”

The Colonials are led by the youngest coach in Division I basketball in Andrew Toole, who at 29, is in his 3rd year on the job after Mike Rice left for Rutgers in 2010. The Colonials were the regular season champions of the Northeast Conference with a 14-4 record, and a 23-10 overall mark. Due to their regular season title, the Colonials were granted an auto bid to the NIT but missed out on the tournament after taking an awful upset loss to Mount St. Mary’s, 69-60 in the semifinals of their conference tournament. One thing that the Colonial basketball team has in common with Kentucky? They both lost at Arkansas this season, although depressingly, the Colonials kept it closer, only losing 79-74. Junior Karvel Anderson is the team’s leading scorer this season, averaging 12.7PPG and shooting an outstanding 44% from 3PT range after transferring from Glenn Oaks Community College this past season. Robert Morris’ shining moment in college basketball was nearly upsetting 2nd-seeded Villanova in the 2010 Tournament, taking the Wildcats to Overtime before eventually falling, 73-70.

Yeah, this is where Kentucky will be playing the opening round of the NIT at this year. The Sewall Center seats a whopping 3,056 people, all of those seats I assume will be filled come Tuesday night. This will be the biggest game to ever be played in Moon Township, based on no research whatsoever, but it’s hard to imagine that Robert Morris has played a bigger home game in the history of their program. Hopefully, the Wildcats will be able to overcome their recent road woes and quiet what I’m sure will be fairly amped up Colonial crowd, even if it is a school night.