Only two things bring me into enemy territory this week: my love of college basketball and attention. This is the week where bragging rights are taken for the next year – an ever important thing when it comes to your typical UL/UK argument. I will get to Dream Game ’09 in a minute. Let’s first take a look back at the week that was in college hoops.

– No team has even looked like they could come remotely close to beating North Carolina. UCONN rolls through non-conference play and then lays an egg against Georgetown. The Hoyas looked vulnerable in an early loss to Tennessee. PITT has feasted on a cupcake schedule and only beat a Rutgers team coming off a 20+ point loss to the Heels by 6. Gonzaga has crapped the bed lately, highlighted by the Portland St. loss. Oklahoma showed they are extremely beatable with their loss to Arkansas. That leaves it just how the suits at ESPN and very few viewers want it: UNC/DUKE holding down the top two spots yet again. They don’t play until Feb 11th, so your SportsCenter college hoops coverage won’t be completely overtaken and ruined quite

– Arkansas big man Michael Washington took Blake Griffin to school in the Razorbacks upset win Tuesday.  The 6’9 junior had 24 points and 11 boards to Griffin’s 21 and 13. Griffin doesn’t take physical play very well which is why I think he’s overrated. Sure he’ll bang around against Davidson’s 6’7 center or lay 35 and 20 on Gardner-Webb, but when he faces someone that doesn’t back down like Washington or Purdue’s Robbie Hummel, he gets held in check. The thing is, there aren’t any players in the Big 12 that will push him around. So expect Mr. Griffin to put up big numbers, but don’t be surprised if Oklahoma falls when someone muscles up to the big guy who enjoys wearing women’s clothes.

– UCONN’s horrible start caused all hope of a classic match-up to cease against Georgetown.  The Hoyas went on a  15-1 run over the first 5:30 of the game and won 74-63. The Huskies won the last 35 minutes by 4 points, showing that they just couldn’t overcome such a large early-deficit.  Greg Monroe fueled the early Hoya run with 5 points and 3 assists all while showing off the type of versatility that makes NBA scouts drool.  He could develop into a stronger more unselfish version of Tracy McGrady. Expect the next battle between these two to be a lot closer…oh wait it’s the Big East – they only play once in the regular season. Bogus.

– Clemson (13-0) and Wake Forest (11-0) are undefeated and highly ranked despite playing the 262nd and 312th toughest schedules respectively. These clouded records are affecting people’s vision about what is the best conference in the country. The ACC is good with the best team (UNC), the ESPN butt-boys (Duke) and the undefeated teams all ranked in the top 16. Realistically, only Carolina and Duke should be considered legit contenders. Remember, a James Mays led Clemson team started the season 18-0 a couple years back and I believe failed to make the tourney.  Meanwhile the Big East has 8 ranked teams, including 4 in the top 10, and 2 teams that have a legitimate beef avout being unranked. There are multiple teams that will play 3 game stretches against possible Final 4 teams. I think it is a completely ignorant argument to say the ACC is better. you’ll understand when the Big East gets 10 teams in the dance this year. 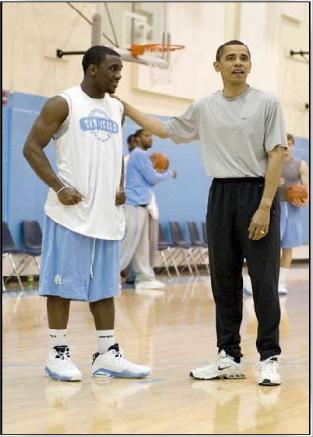 Now to the week to come…

Saturday – The Big East aims to please the basketball fan. A pair of top 10 teams square off last week and there’s more of the same this week with PITT traveling to D.C for Georgetown at high noon on the worldwide leader. Both teams are playing some of the best ball around and both teams want to make a statement to the rest of the league. I’m assuming Sam Young will match-up with Greg Monroe creating a clash between two of the best inside/out players in the country. Note to Monroe : Don’t bite for the head-fake, Trust me.  Following is Tennessee and Kansas at 2. The young Jayhawks are going to have a hell of a time keeping up with the depth and speed of the Ladies Man’s squad. After suffering a nasty fall the other night, Wayne Chism is expected to play in this one.

**UPSET ALERT** – Wake Forest takes it’s undefeated record on the road to BYU. The Cougars are 11-1 with their only loss being a one-pointer to Arizona St. where they hit a game-winning shot barely after the buzzer. I just think the young Deacs will have trouble with the nagging pressure BYU brings and their only road games have been against Richmond and East Carolina. Watch out for the Lee Cummard/Jeff Teague guard battle in this one.

Sunday – Ah, the Dream Game. Quick story I’m sure none of you care about: March 23, 1983 my dad has tickets to the original “Dream Game” in Knoxville. He is a die-hard Card fan like myself and had been waiting years for a piece of the hated Cats. Unfortunately, he could not make it because his 2 day old son (me) was coming home from the hospital. So basically, I was born to be Card fan and Uk hater. The UK game is the most nerve- wrenching-yet-fun game for me too watch all year. Plus, half of my friends are UK fans so I want bragging rights for another year. With that being said, we all know who has the better players this year (Cards). What we don’t know is who has the better team right now. I’ll admit that I was a lot more confident a month ago, but the Cards play their best after a loss – which is unfortunate for the Cats. Meeks and Patterson might combine for 50 points but the rest of the team will have trouble – Cards by 15. OK, now I’ll go back to acting like either don’t exist in the Roundup (my rule).

Monday – What was that?  Another top 10 match-up between Big East teams? You don’t say. Georgetown travels to South Bend to take on the Irish at 7 on ESPN. The Big East powers that be really did a number on Georgetown. The Hoyas play PITT and Notre Dame this week, Syracuse and a non-conference tussle with Dike next week. If they come away unblemished, you might have your #2 team in the country. Frankengody is leading the league in both points and rebounding yet again for the Irish. He might be the quietest 24-13 guy in the history of basketball.  Kyle McAlarney is shooting a sweltering 47% from long range and the Irish are riding smooth after a bumpy start.

Tuesday– The Big Ten has 5 ranked teams and 2 square off against each other at 7 on the deuce. Ohio St. suffered it’s first loss last week, a 28 point beatdown at the hands of West Virginia. They take on a Michigan St. team who just handed Tubby Smith his first loss of the season. Kalin Lucas might is up there with Lawson/Flynn when it comes to ball-handling speed and he leads the nation with a 6-1 AST/TO ratio for the Spartans. BJ Mullens has been a complete and utter bust for the Buckeyes, playing only 17 mins/game and puting up minuscule numbers Maybe Thad Matta is trying to get an extra year out of him. Check out Texas/Arkansas for a nightcap at 9 on the deuce. Arkansas freshman PG Courtney Fortson is putting up 15 points and is 2nd in the nation with 7.1 assists per contest.  I’ll put up the upset alert for this one as well.

Wednesday – ESPN is pulling the old switcheroo with there #1 announcing teams as Dick Vitale and Dan Schulman will call the Nuggets/Heat game at 9 and Tirico Suave, Van Gundy and Mark Jackson will call the Duke/Davidson game. If I had to choose one it’d be Vitale doing the pros. I guarantee he comments on both “how the NBA has the jump-ball rule right” and “lack of traveling calls in the pros”. If Duke doesn’t get the ball inside, they could be left vulnerable against “The Stepen Curry Show”. If Steph can do it against a hostile Cameron crowd, then he can do it in front of 12,000 fans in Sacremento in the league.  The problem with watching Dicky V is Gonzaga at Tennessee that is playing at the same time. Gonzaga is in a free fall after many people (myself included) anointed them #2 behind Carolina. Tennessee is a dangerous group, but one that needs to find some consistency. This is match-up #2 on the season for these 2 teams as Gozaga won the first game 83-74 in the Old Spice Classic.

Thursday – James Harden has been added to the list of Naismith contenders and will showcase his skills in late night hoops with the smooth talking Marques Johnson on FoxSports at 10:30 against Obama’s brother-in-law and Oregon St. Harden is shooting 57% from the field and the Devils, at 14-1, are considered favorites to win the conference title with UCLA. Out of anyone available in the 09 Draft, I think Harden will have the best pro career and shouldn’t slip past the 3rd pick. Michelle Obama’s brother is going to have his hands full with Harden, maybe he should [insert political joke here].

You’d be doing yourself a disservice if you don’t go to The L Yes! Report during pride week.