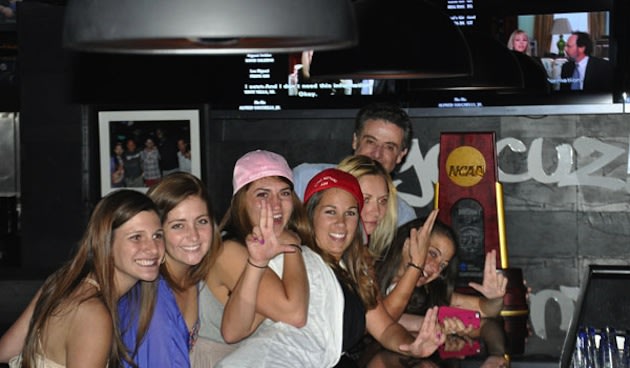 Remember last year when Kentucky won the national championship and Cal embarked on a state wide Trophy Tour to allow fans across the state a chance to celebrate with the hardware? Well not to be outdone Pitino has decided to take his trophy on a tour of his own and is doing so in the most Louisville way possible.

After bringing the trophy along as he went deep sea fishing in the Bahamas Pitino decided the next appearance made needed to be at his daughter’s 21st birthday bash. So while Cal stops at gas stations in Martin County to give people a chance to touch history Pitino decides to degrade the sanctity of the trophy by taking it out amongst the co-eds of Ft. Lauderdale. Seems about right.

A few weeks ago Ally asked the question “Do you still consider Rick Pitino ours?“. My answer to that is a resounding no. Between multiple scandals, the tattoo, and now stunts like this he has unquestionably gone full Cardinal. No official word yet but the next stops on the Pitino Trophy Tour include: dinner at Porcini’s, a stop by a tobacco field so the trophy can learn more about where Black and Mild’s come from, and they’ll wrap things up with a tour of the Crown Royal factory. Fitting. What other stops do you think they’ll try and fit in?