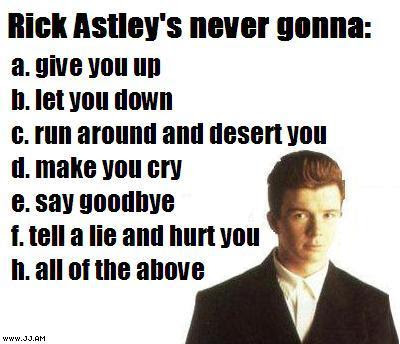 We live in an age where a Duke-educated lawyer can run a massive UK fansite and a WKU student can create YouTube sports and become a household name and the biggest fad in my office.  It’s a time where a fake reality show based around spoiled kids in California can be named a “one of the best shows of the past 25 years” by Entertainment Weekly.  We’re living in strange times, folks.  But, is there anything more strange than the revival of Rick Astley, who celebrates his 43rd birthday today?  Astley’s hit song “Never Gonna Give You Up” topped the charts all the way back in 1987, but he made a triumphant return a few years ago thanks to “rickrolling”, which happens to be one of my favorite things of all-time.  Now, Astley, who is either dead or making music or both a la Tupac, can brag about being the “Best Act Ever” award after being awarded the honor at the MTV Awards: Euro Edition.  If a certain lawyer/blogger gets nominated for the Dick Schaap Award, then we might have a serious reason to fear the apocalypse.  (I kid because I love, Matt.  Don’t fire me.  The job market is rough these days.)

Now, since Matt awoke me from my slumber with claims of his internet being down, let’s just hit a couple of quick UK related notes so I can get back to resting before putting in a solid day of work.  (Side Note:  Not a lot going on today):

(1)  We were fortunate enough this evening to be joined by CBS’ Greg Anthony for a LiveBlog.  Besides finding out that he played his national championship season at UNLV with a broken jaw, that he wants to get into college coaching and that Grandmama is playing a lot of golf these days, there were a couple of very good exchanges.  Here are your cliff notes:

[Comment From Die-Hard UK Student] Greg, do you think Kentucky can turn this around enough to make the NCAA Tournament?
G Anthony:Absolutely, they have as talented a 1-2 punch as anyone with Meeks and Patterson but they need more leadership from the 2 of them to get it done.

[Comment From CharlieH] Greg, do you think Patterson is NBA ready, or should he come back for another season to refine his skills?
G Anthony: He is talent wise and will is a first rounder but I would recommend he come back much like Blake Griffin did this season. It could really improve his value and give him another year to mature mentally.

Matt Jones:Coach Gillispie spends a lot of time talking about the difference between a point guard and a “lead” guard…..saying that UK needs a lead guard more than a point guard. What is the difference in your mind between the two?
G Anthony: A lead guard is a player who has point guard skills ie the ability to initiate offense and get others involved but also has the ability to score when needed. A player that comes to mind for me is Jeff Teague @ Wake and Stephon Curry from Davidson. Point guards don’t look to score as much such as a Ty Lawson

Thomas Beisner:Jay Bilas wrote a great piece on “toughness” in college basketball recently and Gillispie emphasizes it nearly every time he speaks to the media. What do you define as “toughness” and how important is it to a team’s success?
G Anthony: Toughness has nothing to do with your physical ability. It comes down to how you handle adversity. Can you bring your team together, do they trust you? That’s toughness can a team, player, or coach control their emotions when things are most difficult can they keep their focus. It’s not easy but is the key to succeeding.

[Comment From Gregs # 1 fan] your thoughts on UK’s fans?
G Anthony: Passionate and desparate to win a title

All in all, it was a very good chat and yet another cool experience for all of us at the site. We look forward to another good one next week. Also, we look forward to hearing Greg call the UK-Florida season finale in Gainesville.

(2)  Everyone still seems to be quite excited about the recruiting class that Rich Brooks and his staff inked on Wednesday, but perhaps none more so than Brooks himself.  As Chip Cosby wrote, Brooks is expecting an immediate contribution from his freshmen next year.  The 2009 class found itself at #44 in Rivals’ final rankings, but is expected to be one of the best to head to Lexington in a long time <—heard that much?  And, because two in the bush is always better than one in the hand in the world of recruiting, make sure you scroll down and check out Rob’s early look at next year’s class.

(3)  And, because it’s never possible to get too much football, it looks like little Lane Kiffin continues to have himself a grand old time in Knoxville as he continues to run around like a kid whose parents went out of town and left him with the keys to the car.  Earlier in the day, we noted that Kiffin called out Florida coach Urban Meyer for a supposed recruiting violation (Florida said there is no such rule) regarding Meyer calling recruit Nu’keese Richardson while on an official visit to Tennessee.  Now, Richardson’s high school coach is calling out Kiffinfor strange behavior during Richardson’s recruitment, including texting the coach pretending to be Richardson.  Wow, this is so stupid.  And…..SO AWESOME!  I love it.

(4)  The Celtics fell to the Lakers tonight, but Rajon Rondo punked out Kobe Bryant in what turned out to be a pretty chippy game.  You can see it here.

Well, that was pretty weak.  Even I can admit that.  But, you got Rick Astley, Greg Anthony and Chip Cosby.  What more do you people want?  Stay tuned throughout the day for all the goodness including Rob Radio’s Roundball Report, something else and some other stuff.  Maybe even an Ashley Judd story or two.  Happy Friday, sweet readers.  See you in a few…