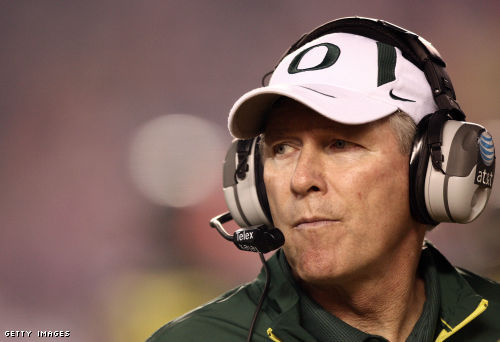 Last night, Papa Brooks got the UK coaching rumor mill churning by tweeting out that he and Karen dined with Mike Bellotti and his wife:

Karen and I had dinner with the Bellotti’s and caught up on old times. Great seeing them.

Bellotti was the offensive coordinator under Brooks at Oregon, and once Brooks left for the NFL, Bellotti was named head coach. Bellotti was the Ducks’ head coach from 1995-2008 with a 116-65 record, including 12 bowl games. In 2009, Bellotti took the job as Oregon’s AD before switching things up and becoming an analyst at ESPN. Bellotti’s name has been tossed around during the coaching search, appearing on most versions of Mitch’s alleged “list.” Bellotti is currently 61, the same age as Brooks was when he took the job.

Was it just a friendly dinner between old pals or is Papa Brooks reaching out on behalf of the BBN?