Buenos Dias and happy day after President’s Day.  I hope you had a good time chopping down the tree and trying to talk with those wooden teeth.  I know I did.  Before we get things going this morning on a strange Tuesday without basketball, let’s stop and give a birthday salute to Commander-In-Chief of former Cats in the NBA, Rajon Rondo.  The former Eastern High School star turns 25 (think about what you had accomplished at 25 and then let’s meet for a beer or thirty) Tuesday and will celebrate by squaring of with the Golden State Warriors.  Despite entering Kentucky with a lot of stars and a lot of hype (Oak Hills’ single game assist record and second-highest single game points total) as a part of the class that was going to save Tubby, #4 never really endeared himself to UK fans and his two years as a Wildcat were mostly disappointing.  Nevertheless, his NBA successes have cemented his status as a favorite of Wildcat fans and became another reason that nearly 9 out of 10 Kentucky residents will tell you they’ve been Celtics fans for life.  Makes sense.  So, on this day, we salute you Rajon Rondo.  May you and your Dan Issel-sized fingers find continued success.

– If there was anything close to a news story Monday, it was Calipari’s assertion that the bench players saw no action against South Carolina for no other reason than Darrin Horn chose to keep his team in a press and Kentucky’s coach had legitimate concerns about his team’s ability to handle it.  It was a far more diplomatic response than “those guys would have blown it”, likely a more truthful answer,  but the mere fact that there was such a heated message board debate after the game about a quartet of players who combine for 3.5 points per contest highlights again what a complete game the Cats played Saturday.  If the only thing we have to complain about is that Stacey Poole didn’t get quality minutes, that’s probably a good thing.

– Matt mentioned this Monday on the radio show, but it bears repeating here for the visual learning crowd.  Coach Cal and his staff, in addition to Trevor Lacey, are targeting a trio of big men who could add some size and depth for next year’s team and potentially fill a larger role going forward.  At this point, according to a person close to the team that Matt spoke with, Kentucky feels that those players in order of likelihood are Braeden Anderson, God’s Gift Achiuwa and Stan Simpson.  Depending on how their visit goes next week, Simpson could move to the top of the list.  Regardless, it’s clear that adding a big man to a star-studded class remains a priority.  And that seems to be a good thing.

– As NBA owners and players try to sort out a new collective bargaining agreement, there are pieces of the negotiations that are of primary interest to Kentucky fans.  They are the potential rule change that would force high school recruits to stay in college for two years and the issue of the looming lockout and how it will affect early entry.  The two topics merged a bit Monday night on Coach Cal’s radio show when Kentucky’s head man made a passing comment about the lockout, which he expects to take place, and how it could impact kids leaving.  Calipari said that this year’s rookie class will need to be aware that they will not receive a paycheck until the season actually starts, which means, in his opinion at least, anyone outside of the top couple of guys, who will have endorsements, could benefit from waiting.  Given his whole-hearted endorsement of early entry in nearly every instance in the past, it was an interesting opinion.  And one Kentucky fans should hope the current players heard.

– The Cats might be off Tuesday night, but that doesn’t mean your fanhood gets  break.  Go ahead and DVR Glee and do the untinkable.  It’s time to root for the Vols.  Tennessee will travel to Nashville to face Vanderbilt – a team they already beat this season – in a game that could even up the records of the Cats and Commodores (victory over Arkansas assumed).  Vanderbilt would still hold the tiebreaker, but Kentucky would be able to straighten that back out, regardless of the results of their game with Florida, on Senior Day March 1 at Rupp.

– Speaking of Tennessee, there was an interesting exchange on Twitter a few minutes ago when Jason Whitlock took a few jabs at Chauncey Billups and UT assistant coach Tony Jones responded by saying, “you a hater.  Lose some weight.”  I have no idea if the two are friendly and if this was some sort of joke, but simply based on the potential that it was indeed sincere, it’s awesome.  I cant wait for Robic to Tweet Seth Davis and tell him his breath smells like a new bag of potato chips after it’s just opened and smells kinda like a fart.

– Look at that Rondo picture.  Why don’t we wear those jerseys?  They are great.

That’s it for now.  Stick around throughout the day for all kinds of good times and high fives.  As usual, Matt and Zach will get the fun going at 10am on Talk Radio 1080.  It will only get better from there.  In the meantime, how about a belated birthday salute to UK assistant coach Orlando Antigua, who celebrated Sunday and, as noted by an e-mailer, was once a shining star in Adam Sandler’s epic tale, Little Nicky…. 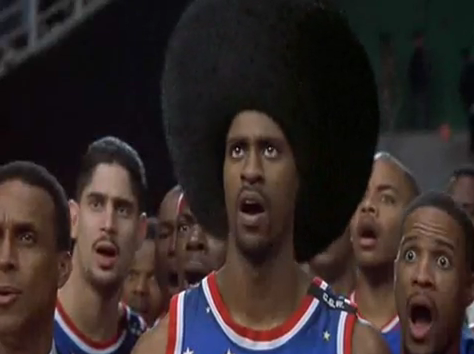