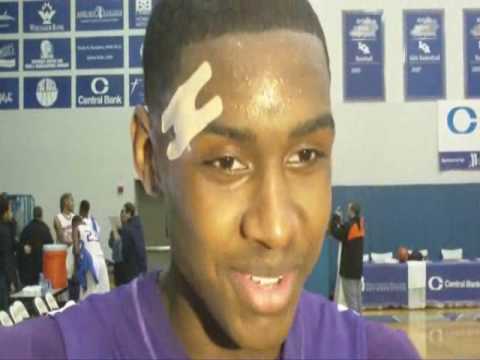 With the #1 and #5 players already locked in for 2011, it seems the heavy focus (at least from a fan’s perspective) is now on forward Quincy Miller of High Point, North Carolina – a town I profiled briefly in a research paper UK’s Institute of Rural Journalism (today is personal facts Tuesday, right?).  So, for those fans, the Courier-Journal’s Jody Demling tweeted out some not-so-pleasant info this afternoon as he said the 6’8″ forward is “feeling Louisville” thanks to a good relationship with new Pitino assistant Tim Fuller.  Kentucky, though not necessarily viewed as the leader, is seen as one of the favorites for Miller’s services and a simple statement is probably nothing to be too awfully concerned with.

At least, that’s what I’ve deduced after taking a trip over to UrbanDictionary.com to try to determine the correct use of the word “feeling” these days.  Here is what I found:

The way one reacts to an event; the sensation caused by touch; A sensation not felt by chuck norris or Ray Charles.

Ex. Chuck Norris killed the violent mob of people with a roundhouse kick to the face without any feeling.

I wish I had someone to make me feel no alone. No one knows how much I NEED someone to make me happy. I’m sinking in the quicksand of my own emotions and I need someone to pull me out. No one is there to save me. Absolutely no one to pull me out. I don’t know how much longer I can go on feeling like this. I have no one and I never have either. I’ve been trying to find the answer, but I’m beginning to think that there is no answer. There is no answer to the loneliness that I feel. There is no way out of the quicksand of my own emotions. People say that there is always someone else in the world that feels exactly how you do. Knowing that doesn’t make me feel any less alone. My feelings have been like this for many years, and they seem to be getting worse. I wish that I could just shut my feelings away and just be happy. However, I can’t do that. I praise anyone that has the ability to do that. I don’t know when my feelings will change. I put all my hope into changing the way I feel, soon. If I don’t change my feelings, I am certain that they will be the death of me.

So, there you go. That’s what it means to be “feeling Louisville” and it doesn’t matter how many times you Google that U of L cheerleader. The definition isn’t changing.