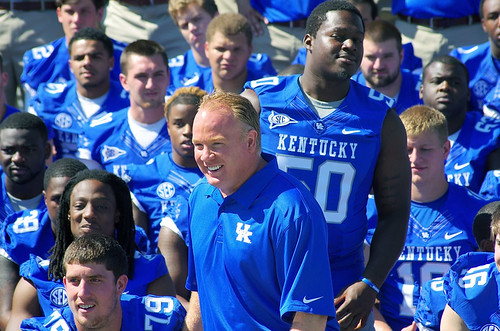 With football hovering on the horizon, it’s time for the national media to post their preseason predictions. So far, analysts seem pretty cynical (or realistic?) about Kentucky’s first season under Mark Stoops. Yesterday, Athlon Sports’ staff posted their predictions for UK, ranging from two wins to three, and Sports Illustrated’s Zac Ellis has a slightly more optimistic take, predicting the Cats to win four games:

– Mark Stoops, Kentucky: The youngest brother in the Stoops family coaching tree lured more than 50,000 fans to Kentucky’s spring game in April, invigorating a program that’s traditionally been an SEC bottom feeder. Yet while enthusiasm is at an all-time high, the program will likely take on a rebuilding theme in Stoops’ first campaign. The Wildcats finished near the bottom of the SEC in every major offensive and defensive category in 2012, and they don’t have a ton of experience coming back. Stoops rebuilt defenses before as a coordinator, but with schematic changes, limited offensive talent and a fairly brutal schedule, the first year of his Kentucky tenure could be a struggle. Predicted 2013 record: 4-8

I’m also picking the Cats to get four wins (five after I watch KYWildcatsTV videos), which is actually pretty darn good if you look at the schedule and the state of Kentucky’s roster.

36 Comments for Preseason predictions are rolling in, SI says Stoops will get four wins