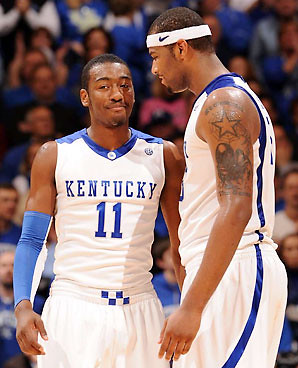 Can’t we just split the Player of the Year two ways?

As tournament time approaches, legit candidates for Player of the Year begin to emerge. As a UK fan, we all know and appreciate the fact that it is more fun to have a season where one of the players wearing Big Blue is in serious contention. While it is fun to get the publicity, and we certainly want our man John Wall to win, what is the correlation between Player of the Year and winning an NCAA Championship?

I ran back over the past 11 years with three of the big POY Awards. Check it:

First, the level of group-think here is a bit much. I would have added more columns, but all the POY awards are pretty much the same. With the exception of David West/TJ Ford in 2003, every POY award seems to go to one particular player.

Second, Duke was the last team to have a POY winner and win the National Championship, and they did that way back in 2001 when Coach K could still recruit.

So take heart, Kentucky fans. If Evan Turner winds up with the award, that almost assures Ohio State won’t win the championship and increases UK’s chances of coming home with the big prize. Of course, if John Wall ends up with the hardware, forget this post ever happened.