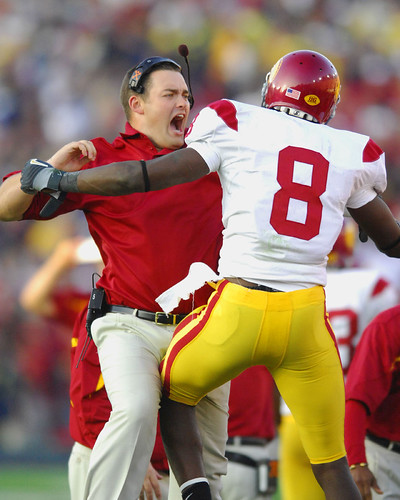 I’ve watched this video that was on Deadspin about 10 times now and I keep wanting to tell myself that it’s not real and that it’s not possible that this guy is actually the son of USC head coach Pete Carroll. Surely, no self-respecting top-tier head coach would allow anyone – let alone his own offspring – to parade around a practice combining the over-cussing and lame shenanigans of a Saturday Night Live character with douchey bravado that one can only have when your dad has handed you something that you don’t deserve.

Sadly, though, the turd in this video wearing the upside-down visor and barking orders like a metrosexual drill sergeant is actually Pete Carroll’s son and the tight ends coach for USC. Meet Brennan Carroll. He’s the 29 year-old football coaching equivalent of the guy in your fraternity who wouldn’t be caught dead not wearing his letters and can’t stop talking about how he “wants to haze your balls off, bro!!!”.  And, believe it or not, he actually makes Rudy seem like he had a quitter’s attitude.

If nothing else, this video proves that the first thing to take a hit when you start paying players is the quality of the coaching staff. It is pretty heavy on the awesome, though. Be warned, sweet reader, that this video contains a lot of language that you wouldn’t use in front of your mother – but most of it is bleeped out. And, yes ladies, according to his bio he’s still single.