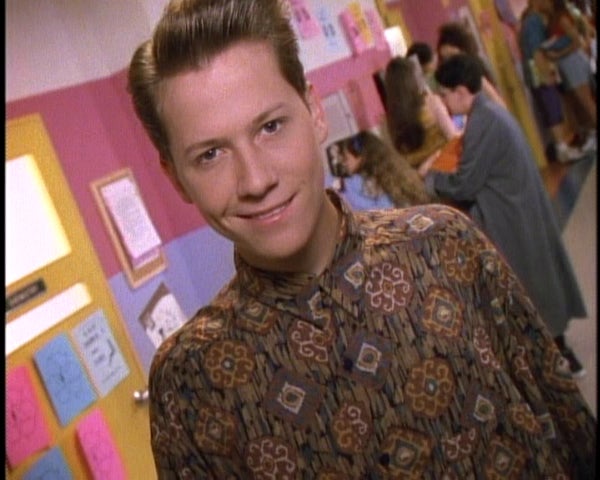 When it comes to iconic television shows that illustrate the early 90s view of high school, we all know and appreciate “Saved by the Bell.” The hit show with Zack, Slater, Screech and the gang is known by the masses and is loved by everyone from Jimmy Kimmel to John Clay. But a show that is often forgotten is that of today’s birthday honoree Corin Nemec, star of “Parker Lewis Cant Lose.” Parker Lewis is not remembered to the degree it should be, mainly because it played at a time when network television was not what it is today. Parker Lewis was an early FOX show, running when the network was really only known for “The Simpsons” and “Married With Children.” It featured the tales of a high school student who was a bit nerdy, got into crazy adventures and had the ability to stop time and talk about what was going on…a good feature on any comedy. Parker’s goal was to be “cool” and the show would often be somewhat surreal, with Parker doing odd things, utilizing crazy camera angles and dropping pop culture references that would even make Tomlin nod in appreciation. During its three year run, “Parker Lewis” had low ratings and actually was one of the first shows to get an internet fan base appreciation…kind of like Justin Beiber for the mid 90s. It was cancelled after three seasons and now only lives on in the hearts of its fans everywhere…both of us.

A number of notes to get you ready for the weekend:

— There may have never been a football-basketball weekend in Lexington with two worse games than this one. The basketball team plays Dillard University and the football team goes up against Charleston Southern, a two-game sequence of suckitude that has previously never been topped. For fans who go to both games and stay until the very end, an award should be given…Outstanding Acheivement in the Field of Fandom. I will of course be there, but I forgive you if you are doing something else.

— The basketball game will give us a chance to see if the small lineup can make up for some of the deficiencies from last week. Calipari went off today at his press conference, noting that this team was soft and let itself get pushed around by Pikeville. While Calipari clearly forgot just how “Tough” Landon Slone really is, nevertheless if the small lineup is going to work, improvement has to be shown. That will be the focus of what I look for on Friday night.

— Once again we all continue to wait for news of Enes Kanter and today the NCAA released this blog entry on the policy for European players. It goes into some detail as to why the NCAA changed its European rule and most interestingly to me, says this:

It is thus clear that the NCAA knows the deal as to the European teams’ ways of trying to protect their players. It was the impetus for the rule change and is clearly an obvious factor in their decisions. With Enes having his Turkish team work actively against him on this eligibility determination, one has to read this blog as at least partially good news that the NCAA has its eyes open when Fenerbache speaks.

— Did anyone but me think it was hilarious that the NY Times and ESPN released their Cam Newton stories within about two minutes of each other. Both Pete Thamel and Pat Forde released their “exclusives” back to back, further giving evidence for those of us that believe they are one and the same. I have never seen the two of them in the same room at the same time…this should be investigated.

— I am done with the John Wall-Colin Cowherd stuff. When Colin started on Wall again today, not addressing his most inflammatory comments (that Wall was “selfish” and not “bright”) and instead changed the argument to one about him shooting too much on fast breaks, it became clear that this was simply a ploy to make loud noise and get attention. He was successful but I guess I gave him too much credit for actually having a point and not trying to stir the pot. I wont make the same mistake again.

— Speaking of Wall, the blog Mediatakeout.com has pictures of his new lady, a Maryland bikini model that the site claims is now dating the great one. Nice work John….KSR approves.

— Two NBA notes for UK guys that arent great. Demarcus Cousins lost his starting job to Samuel Dalembert after the Kings’ loss to the Lakers on Wednesday night. I watched the game and it was great to see Boogie doing his thing (which included some good trash talk with Lamar Kardashian). I am sure he will get it back soon, as it is a minor bump to superstardom. Less positive is the news that Jodie Meeks is still inactive in Philadelphia. He has lost his role as the team’s “Shooter” to Jason Kapono and it isnt clear when he will return. The Cats go undefeated last year if Meeks is on that team. Thats my feeling and you wont convince me otherwise.

— Cole Aldrich plays in the NBA. I find that bizarre…

— It was the picking the best of two bad options for Joker today when he decided to start Donald Russell this weekend versus Charleston Southern. With both Derrick Locke and Raymond Sanders questionable, he may have had no choice, but the decision makes it look like the complaining by his mother led to him getting the nod. Russell’s mom put Joker in a bad spot and no matter what decision he made, it wouldnt have looked good. Dealing with parents is not easy for a Coach of any team, with players of any age (as soccer moms and dads all nod their heads and agree). But Russell’s mom sure made it even more difficult.

— You may remember the 2011 recruit Myck Kabongo who decommitted from Texas last week…well he had a change of heard and said today that he “bleeds burnt orange”, which is really unfortunate and probably be something he goes and gets looked at by a medical professional. He is back with Texas and UNC, Duke and UK now dont have to recruit him anymore.

— Finally, we will have TWO LIVE BLOGS ON KSR THIS WEEKEND. We will do one for the basketball game at 6:30 pm on Friday night and one at noon on Saturday for the football game. Make sure and check them out.

Its a big day here on KSR…more Halloween pictures from the contest, Drew breaks down Charleston Southern as only he can and Beisner does the same to Dillard. Plus a debate we had on the radio today will be debated on the blog on Friday. Below is today’s show, which includes the debate as to how serious a sports radio show should be, stories from the Billy Clyde era and Tom Leach talking about the team and war tales from the past. Check it out and stay tuned later today: